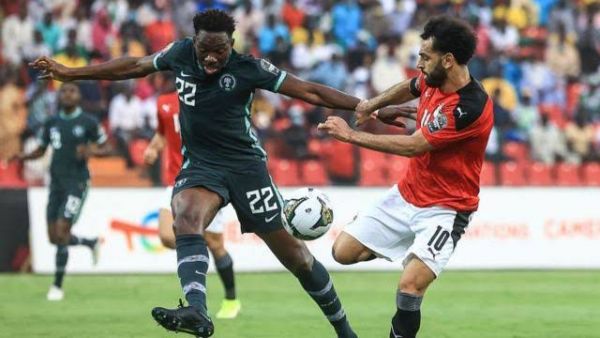 Super Eagles of Nigeria overcame Egypt 1-0 in their opening match at the ongoing Africa Cup of Nations (AFCON) at the Estadio Roumde Adjia in Cameroon on Tuesday evening.

Kelechi Iheanacho scored the only goal of the match as the Super Eagles outclassed the Pharaohs and took charge of group D.

The Pharaohs, who paraded Mo Salah, Ramadan Sobhi, Mohammed Elneny and Trezeguet, struggled to find their groove in a game that the Super Eagles dominated, most especially in the first half.

Iheanacho put the Eagles ahead in the 30th-minute with a stunning, long-range shot.

The England-based striker, who played behind Taiwo Awoniyi, beat Mohammed El Shenawy, Egypt’s goalkeeper, from a tight angle with his right-footed shot to hand Nigeria the lead.

During the thrilling encounter, the Pharaohs also found it difficult to break down the Super Eagles defence with Kenneth Omeruo and William Troost-Ekong dealing well with long balls from the opposition.

In the second half, the Eagles continued to push for the second goal but Iheanacho couldn’t punish Egypt after they committed a blunder in their box.

Both teams launched attacks with neither side happy to sit back and invite pressure. Salah’s effort was well saved by Maduka Okoye while Chidera Ejuke’s powerful low shot was blocked by El Shenawy.

Egypt looked adventurous as the likes of Sobhi and Salah became a threat in the final third.

A cross from the flank was met by Salah but his strike was blocked by Kenneth Omeruo.

The Super Eagles were however dealt a deadly blow when Kenneth Omeruo was stretched off due to injury.

The match ended 1-0 in favour of Nigeria.

The Nigerian senior national side will face Sudan on Saturday in their second group match as the team seeks to secure safe passage to the round of 16.