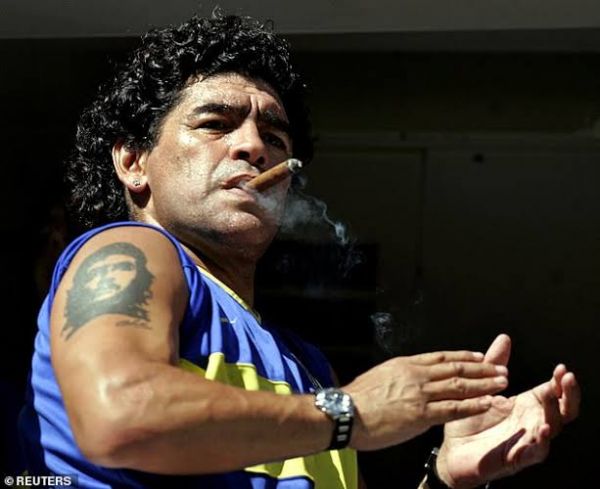 The Argentinian legend, widely regarded as one of the greatest players of all time, passed away at his home in Buenos Aires at the age of 60 on Wednesday after suffering a heart attack having had successful brain surgery earlier in November.

Maradona played for some of the biggest clubs in the world, including Barcelona in and Napoli in, as well as captaining Argentina's national team, leading them to glory at the 1986 World Cup.

He was renowned for his tenacious and skilful style of play, scoring the famous 'Hand of God' goal against England in the 1986 quarter-finals, followed up by a goal considered by many as the best ever in the same match.

But his life off-the-field was just as infamous as the time he spent on it.

A sporting hero to many, he struggled with his fame, courted controversy with his drug abuse and alleged involvement with the mafia, and contended with obesity throughout his life.

The fifth of eight children, he was born in Lanús, in the Argentinian province of Buenos Aires, on October 30, 1960 to a Roman Catholic family.

Maradona was very close with them, demonstrated during a 1990 interview with Sports Illustrated during which he shared phone bills which showed he had spent a minimum of 15,000 U.S. dollars a month calling his parents and siblings.

His family was poor, but close-knit, and he received his first football as a gift at the age of three, quickly falling in love with the game of football in Argentina, where the sport plays a key part in its cultural identity.

By the age of 10, Maradona had joined Los Cebollitas - the youth team of Argentinos Juniors, one of the biggest clubs in Argentina - leading them to an incredible 136-game unbeaten streak.

He was even given the nickname 'El Pibe de Oro' ('The Golden Boy').

He made his first professional debut for the club's senior team shortly before his 16th birthday, before going on to play for Bocca Juniors, Barcelona and Napoli, making 491 professional appearances and 91 for the national team.

But despite his highly successful playing career and 1984 marriage to his childhood sweetheart Claudia Villafane, by the mid-1980s, Maradona had become addicted to cocaine, having started to use the drug in Barcelona in 1983.

By the time he was playing for Napoli - in the southern Italian city of Naples - he had a greater addiction, which started to interfere with his ability to play the sport he was now an icon of.

During his time in Naples, Maradona was elevated to the status of a demi-god in the city after helping to win Napoli its first European competition - the UEFA Cup, and two league championships.

But he was having a particularly hard time dealing with his fame, unable to go anywhere in the city without being hounded by the media and playing for a club he wanted to leave - all whole in the depths of a cocaine addiction.

According to the New York Post, there Maradona enlisted the services of the Camorra - an notorious mafia crew - who offered him protection in Naples, considered one of the most dangerous cities in Europe at the time.

This served to indulge his habits of partying, taking hard drugs and enjoying the company of women other than his wife - reportedly having multiple affairs.

After a phone call with a prostitute was tapped by the police in January 1991, charges were brought against Maradona for cocaine possession and distribution, and in April the same year a blood test found traces of the drug, leading to a 15-months ban from football.

From Italy, he fled to Argentina, but was arrested there for cocaine possession as well, with pictures from the time showing a tearful Maradona being led away by police.

In 1994, eight years after his epic World Cup-winning performances in 1986, Maradona's issues with drugs were laid bare to the world in a manic celebration against Greece during the World Cup group game in the United States.

After scoring a goal, the then 33-year-old wheeled away in celebration, screaming maniacally into a pitch-side camera.

Not long after the goal, Maradona was dismissed from international duties, and was sent home from the World Cup after testing positive for five variants of ephedrine - a performance enhancing drug banned by football's governing body.

In 1998 - a year after he had retired from professional football - the icon received a prison sentence of two years and 10 months following an incident in which he shot an air rifle at reporters.

The incident had occurred in February 1994, and resulted in four injuries after Maradona had become angry at journalists showing up at his Buenos Aires house. Footage from the incident showed him firing the weapon from behind a car.

He was also reportedly heavily in debt in Italy. In march 2009, Italian officials announced that the footballer still owed the Italian government €37 million in local taxes, €23.5 million of which was accrued interest on his original debt.

After retiring from his playing career, Maradona remained in the spotlight, for a time hosting a talk show in Argentina from 2005 inviting guests from the world of show-business and football.

He also took park in the 2006 Soccer Aid in the UK, while also returning to former club Boca Juniors as a sports vice-president a year earlier, but left the role a year later.

Maradona embarked on a career in football management, starting as earlier as 1994 while he was playing.

He made an unlikely return to the national team in 2008 and eventually went on to manage Argentina's national team in the 2010 World Cup, which saw them get knocked out to Germany 4-0. He left a few weeks after the defeat amid a row with the country's football association.

Maradona also had the tendency to put on weight, suffering increasingly from obesity as he got older. At one point, he weighed 280 lbs (135 kg), and was obese at the end of his playing career.

After another emergency hospitalization in 2004, Maradona was counseled for drug abuse and in September of that year traveled to Cuba for treatment at Havana's Center for Mental Health. There he was visited by his friend, Cuban President Fidel Castro.

In Cuba, Maradona took to playing golf and smoking cigars. He frequently praised Castro and Argentine-born revolutionary 'Che' Guevara, who fought with Castro in the Cuban revolution - even sporting a tattoo of Guevara on his right arm.

Maradona said he got clean from drugs there and started a new chapter.

In 2005, he underwent gastric bypass in Colombia, shedding more than 100 pounds before appearing as host of a wildly popular Argentine television talk show.

On '10's Night,' Maradona headed around a ball with Pele, interviewed boxer Mike Tyson and Hollywood celebrities, and taped a lengthy conversation with Castro in Cuba.

In retirement, Maradona also became more outspoken. He sniped frequently at former coaches, players - including Pele - and the pope.

Visiting the Vatican in 2000, Maradona said he had to distance himself from the Catholic Church, telling reporters he was disgusted having seen the gold ceilings, saying Pope John Paul II should 'sell' them if he truly wanted to help the poor.

He joined a left-wing protest train outside the Summit of the Americas in 2005, standing alongside Venezuelan President Hugo Chavez to denounce the presence of then-President George W. Bush.

He later underwent surgery for a hernia in 2019, and on November 2, 2020, he was admitted to hospital to have brain surgery to remove a blood clot on the brain, and was released on November 12 after a successful surgery.

But yesterday, on November 25, he passed away after suffering from a heart attack. Argentina will reportedly hold three days of mourning for his death.