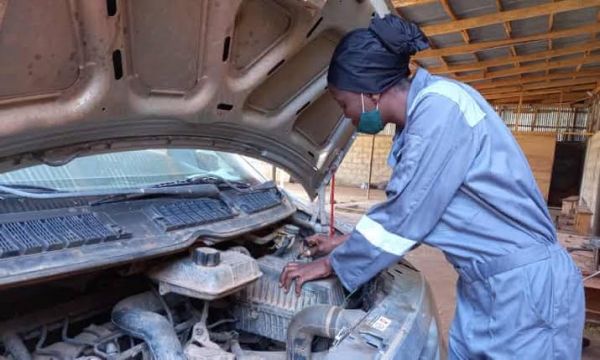 The green-and-red Nana Female Mechanic Garage sign is visible from the main road into Sokoto city. Behind its sliding iron gate, Zainab Dayyabu stomps around in heavy work boots and a blue jumpsuit, her hands callused and oily.

“I love the job I’m doing,” says the 23-year-old, as she opens the bonnet of a Peugeot van to test its battery.

Zainab is one of 25 young apprentices at the first all-female garage to open in the northern Nigerian state of Sokoto.

The workshop aims to provide jobs for women in an industry dominated by men and challenge traditional gender roles in this conservative and highly insecure region of the country.

“It is not just an ordinary female mechanic shop,” says Fatima Adamu, founder of the non-profit organisation Nana: Girls and Women Empowerment Initiative, which opened the workshop in 2019.

“We want it to be of international standard, where women specifically can get the best services. And for that to happen, we must really train the girls. We want to be scientific.”

Apprentices were selected from a vast number of applicants, from unemployed graduates to women from poorer families with few opportunities in a state where less than 2% of girls finish secondary and the literacy rate for women is just 10% compared with 40% for men. About 35% of 15- to 34-year-olds across Nigeria are unemployed.

Over a two-year apprenticeship, the women are trained and given a weekly allowance of 2,100 naira (£3.75). They also have access to a shared computer to browse learning resources online.

The first cohort is coming to the end of their apprenticeship and most will stay on, says Adamu. “After being trained as mechanics, we are hopeful some of them would stay in the garage to work or set up a garage as a group, including selling vehicle spare parts.” She hopes plans for an automobile centre in Sokoto being considered by state authorities will provide further jobs for Nana mechanics.

“I want our women to get out of the societal norms that bind them,” she says. “There are so many technology-related activities that women are excluded from in this part of the country. We cannot succeed in northern Nigeria without technology, and women must be part of that journey.”

Adamu says the scheme has had support from the state’s traditional and Islamic leaders, who are beginning to recognise that women need to be economically independent.

Customers such as Abba Lawal are convinced. He regularly brings his car to Nana’s and says they do better work than other places: “I come to the garage to encourage the girls and also I like the way they work on cars without delays.”

The programme has been so successful that there is already a waiting list for the new apprentice scheme starting this month.

Hindatu Dayyabu (no relation to Zainab), a supervisor at the garage, hopes to build up a customer base of female drivers.

“We have many women who are car owners now compared with the 70s and 80s,” she says. “We did an assessment and realised that women find it difficult to take their vehicles to the garage for repair because it is a male-dominated space. They don’t feel comfortable.”

Zainab’s parents were initially concerned when she told them she wanted to be a mechanic.

“They [her parents] said I wouldn’t find a suitor, that it is heavy work for females. But I decided to apply,” she says from under the Peugeot bonnet. “My gender shouldn’t be a barrier to what I want to become in life.”

Her parents are now her biggest cheerleaders. “At some point, I wanted to drop out … but my mum kept encouraging me. In the next few years, probably two or three, I want to be independent and have my own garage.”