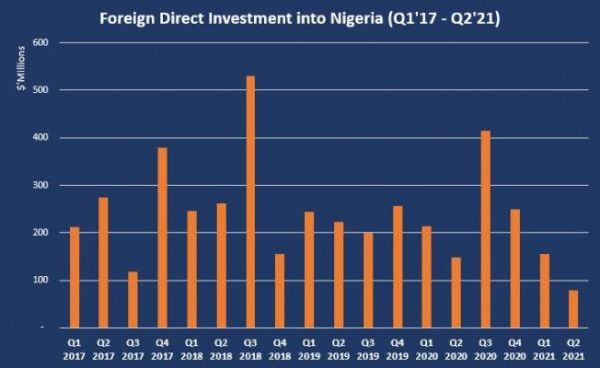 Foreign investors appear to have boycotted the Nigerian market as capital importation dropped by $4.08bn (N1.68tn) in one year, latest statistics have shown.

Between January and September 2020, total capital importation amounted to $8.55bn, data from the National Bureau of Statistics revealed.

However, according to the latest capital importation report by the NBS, during the same period in 2021, foreign capital inflows into the country fell by $4.08bn (N1.68tn) to $4.47bn.

In terms of sectors, the banking industry led the chart by contributing $2.99bn to the total capital importation in Q1 2020.

In the second quarter of 2020, the aggregate capital inflow fell by 77.8 per cent to $1.29bn when compared to the preceding quarter.

The rise in capital inflows in Q3 was driven mainly by other kinds of investments besides FDI and FPI, the NBS said.

Further analysis showed that in Q1 2021, the total value of capital importation was $1.90bn which represented a decline of $3.95bn when compared to the same quarter in 2020.

Responding to the development, Managing Director, Cowry Asset Management, Johnson Chukwu, said that the likely cause of the decline was a decrease in the FPI, which is the major driver of capital importation.

He noted that portfolio investors might be discouraged to invest in the Nigerian market due to forex illiquidity.

He said, “The decline in capital importation has been consistent for the past three years if you look at the data.

“In terms of portfolio investment, which is the major component, I think the issue is that foreign portfolio investors have likely stayed away from the Nigerian market because of foreign exchange illiquidity, as some of the funds that are trapped are yet to be accessed.”

He expressed hope that the efforts of Central Bank of Nigeria to meet FX demands and clear arrears would incentivize portfolio investors to return to the Nigerian market.