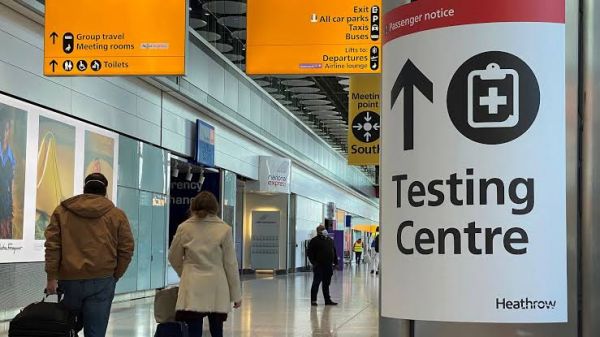 The current Covid testing system for people travelling to England has "outlived its usefulness", Transport Secretary Grant Shapps says, as Omicron is now "widespread and worldwide".

Ahead of a rule change later this week, he said the system - introduced to slow Omicron's spread - had "done its part".

Pre-departure tests will end for fully vaccinated travellers and day two PCRs will be replaced by lateral flow tests.

Mr Shapps said ministers would "ensure a stable system is in place for 2022".

The shake-up, announced on Wednesday, came after travel firms said the measures were not effective now Omicron was spreading widely.

Under the current rules in force until Friday, all fully vaccinated travellers over the age of 12 must show proof of a negative lateral flow or PCR test taken in the two days before coming to the UK. Fully vaccinated people must also pay for a PCR test within two days of arrival and self-isolate while waiting for the result.

People who aren't fully vaccinated must currently take PCR tests on both day two and day eight after arriving, and self-isolate for 10 days.

But under the new rules:

From 04:00 GMT on Friday: fully vaccinated travellers and under-18s will no longer need to take a pre-departure test two days before travelling to England. On arrival, they will have to take a PCR test but won't have to self-isolate while awaiting the result

From 04:00 GMT on Sunday: they will only have to take a lateral flow test instead of a PCR test on day two. This test must be bought from a private provider - free NHS tests are not allowed

Unvaccinated passengers will need to continue to take a pre-departure test, PCR tests on day two and day eight, and to self-isolate for 10 days

People going abroad should continue to check the travel rules for their destination country.

Scotland's health minister Humza Yousaf spoke of his "frustration" that the changes were announced for England only, despite UK-wide talks on what the rules should be. He said he would give an update on Thursday afternoon, while Welsh health minister Eluned Morgan said Wales would "reluctantly" align with England.

Northern Ireland has confirmed it will also follow suit.

Two doses of some vaccines offer almost no protection from an Omicron infection, although they should still greatly reduce the risk of needing hospital care. But a third booster prevents around 75% of people getting any Covid symptoms.

Sarah Pitt, virologist at the University of Brighton, said it was "sensible" to test people before they got on a plane, as about one in three people who have Covid do not have symptoms but can be infectious to others.

"It's not that you're a special risk from having been travelling, but people should be testing themselves regularly anyway," she said.

PCR tests have been used for travellers as they are able to distinguish between different variants, unlike lateral flow tests.

Asked whether the rule change could mean new variants are missed among people arriving from abroad, he said anyone who had a positive lateral flow test must get a PCR test via the NHS so it can be checked for new variants using sequencing techniques.

Shapps said the UK had a much higher level of sequencing than any other country in the world, so it was tracking new variants very carefully "regardless of whether it starts here or somewhere else".

He warned that stricter travel measures could be reintroduced if another variant of concern emerged, and earlier tweeted that the rules would be reviewed by the end of the month.

The travel industry welcomed the relaxation of the rules.

EasyJet chief executive Johan Lundgren said the changes would make travel "much simpler and easier", as customers could now book and travel with "confidence".

Chief executive of travel association Abta, Mark Tanzer, said it was "potentially very positive", but that damage had "already been done".

"We now hope to see confidence return as we enter what is usually the peak booking season for summer holidays," he added.

Steve Heapy, boss of the airline Jet2, also said the timing of the announcement would make a "huge difference".