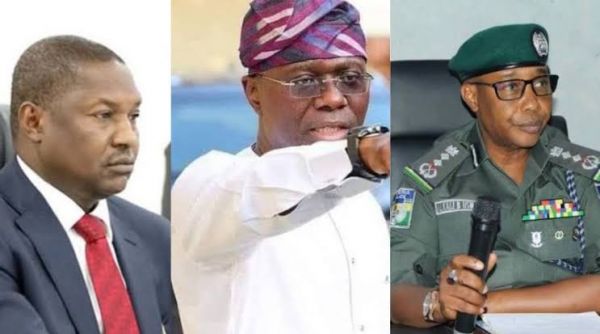 Attorney General of the Federation, Abubakar Malami, says he “takes exception” to Wednesday’s reaction by Southwest governors to the Magodo Estate incident during the visit of Lagos governor, Babajide Sanwo-Olu, to the estate.

Southwest governors had earlier reacted to what they described as a “disrespect” to Sanwo-Olu.

A chief superintendent of police officers had openly defied the order of Sanwo-Olu to withdraw his colleagues who had invaded the estate.

The unidentified officer told the governor that he only answers to the instructions of his superiors and had yet to get an order to leave the estate from the inspector-general of police, Usman Alkali, and the attorney-general of the federation, Abubakar Malami.

In a statement signed by Ondo governor, the governors condemned, “in very gross terms, the role of the Attorney General of the Federation, Abubakar Malami in this act of gross moral turpitude.”

However, Malami, in a statement signed by his media aide, Umar Gwandu, said he was surprised by the statement from the governors.

“We see it as a vituperation of ulterior motives of some political class, who derived pleasure in dragging the name of Malami in the mud to achieve some sinister objectives,” the statement read.

“The role of the executive is, in this respect, simply to aide the maintenance of law and order in due compliance with rule of law arising from giving effect to the judgment of the apex court of the land.

Malami said the Supreme Court judgement concerning the land tussle was delivered before he was appointed. He faulted the criticism of the governors, saying officers’ presence at the estate was not unruly.

“The judgment was a reaffirmation of the judgments of the Court of Appeal and High Court delivered on 31st December 1993,” he said.

“It is widely reported in the papers that the Lagos State Governor was quoted to have said, “I’ve spoken extensively with the Inspector-General of Police and the Attorney-General, and we’ve resolved all the issues”.

According to the statement, the attorney general would be happy if the governors would “help to unravel the circumstances preventing the Lagos State Government from enforcing the court order despite several attempts from 2012- 2015, as the so-called settlement initiative started in 2016.

“Some of the cardinal pillars of democratic government are the doctrine of separation of powers and obedience to the rule of law inclusive of Court Orders.