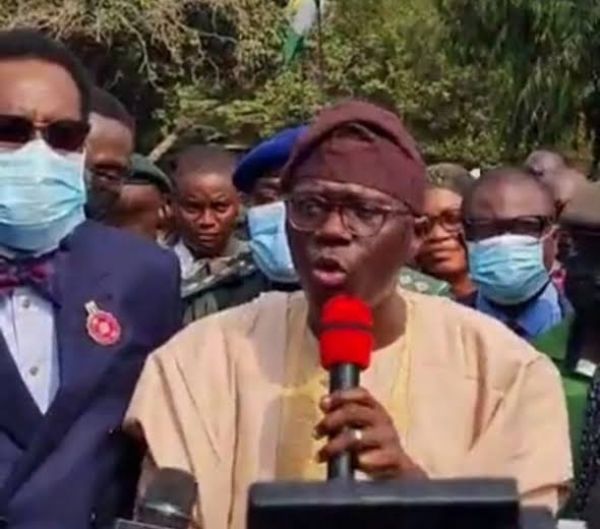 Abimbola Oyewole, identified as a chief superintendent of police (CSP), on Tuesday, defied Babajide Sanwo-Olu, governor of Lagos, during the latter’s visit to Magodo estate to intervene over a planned demolition.

An earlier threat to demolish houses in the estate on December 21 had been resisted by residents, and the police and bulldozers were withdrawn from the estate after the state intervened.

According to the Lagos government, the case dates back to a demolition exercise at Shangisha village between 1984 and 1985, after which a supreme court verdict ordered the state to give the Shangisha landlords 549 plots of land as a “matter of first priority”.

The state, however, said the supreme court verdict only relates to “allocation” and not “possession” of any land, adding that the Shangisha landlords cannot claim any land at Magodo.

On Tuesday, residents had converged in front of the estate, demanding the intervention of the state government amid renewed threat of demolition and police invasion.

Sanwo-Olu had later arrived the estate with some members of his cabinet including Moyosore Onigbanjo, the attorney-general of the state.

On arrival, the governor asked the CSP to explain his reasons for being at the estate without the knowledge of the state.

“It’s a case between the supposed people and the Lagos state government. It has nothing to do with the residents here. Please, can you call your superior in Abuja and tell them the governor is here and I’m the chief security officer and that you don’t have any business being in my state and that I want you to disengage here?” Sanwo-Olu told the CSP.

Responding, Oyewole said: “I’m here on the instruction of the inspector-general of police, through the AGF, sir. I’m too small or too low to call them. Your excellency, with due respect, you can call them directly.”

Sanwo-Olu, however, insisted that he had earlier spoken to Abubakar Malami, attorney-general of the federation, and that the latter had claimed that he wasn’t aware of the police invasion of the estate.

But the CSP insisted on his stance, saying “it is not my duty to call because I’m too low to do that.”

After some back-and-forth, Sanwo-Olu, who described the police invasion as an “illegal operation”, said he would call the IGP and the AGF.

Afterwards, the governor announced that the police officers had been ordered to “stand down”, while a meeting with the affected parties would hold on Wednesday.