Obtaining Covid-19 vaccination certificate without getting the vaccine: Here’s how it’s done 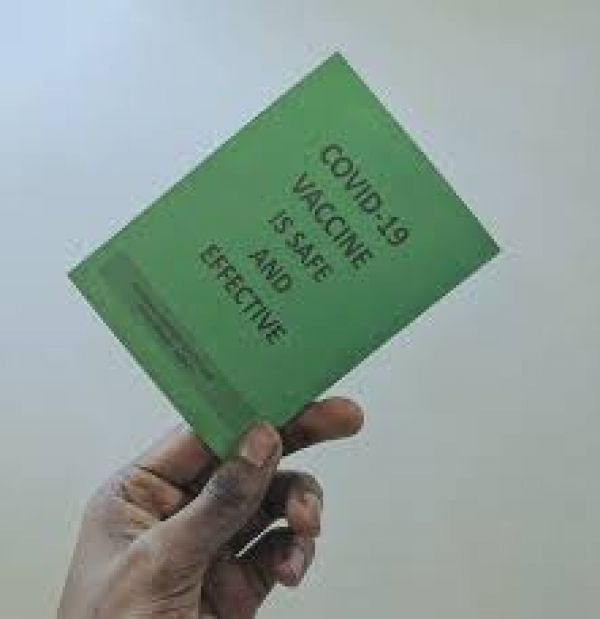 With a female pseudonym, anonymous address, the local council of origin and date of birth, GBENGA SALAU, who visited Owerri, Imo State, recently, procured a Covid-19 vaccine card, showing the recipient had received the two doses without visiting any health centre to get a jab.

AS the outbreak of the coronavirus (Covid-19) pandemic in early 2020 inflicted pain and misery on the world with many dying, there were calls for a quick solution to ending the pandemic, including finding a medical solution, especially as the lockdown was introduced to halt the spread was inflicting another round of pains on the people.

So, the arrival of Covid-19 vaccines was a huge relief, but that was followed by controversies that further put doubt and unbelief on issues around the coronavirus in some countries, including Nigeria. But the EU’s health authority and the WHO continually maintained that the benefits of the vaccine far outweigh the risks, which probably explains why European countries kept administering vaccines to their citizens and Nigeria has also not been left out.

The journey to vaccine cards in Nigeria
In Nigeria, after weeks of speculations and doubts among Nigerians whether the country would secure the Covid-19 vaccine, the Federal Government on March 2, 2021, took delivery of the first batch of 3.94m doses of AstraZeneca vaccine from COVAX. Additional doses were received afterwards.

After the vaccine was tested and certified to be effective and safe for use in the country by the National Agency for Food and Drug Administration and Control (NAFDAC), the government, through the Presidential Task Force on Covid-19, inaugurated a national Covid-19 vaccination programme on March 5, 2021, at the National Hospital, Abuja. Thereafter, state governors launched vaccination programmes in their states and further cascaded it to the local councils in their respective domains.

That Nigerians are apprehensive about taking the vaccine jab could be seen in the ultimatum given by the government to all federal and state civil servants to take the vaccine, with the warning that those without evidence of receiving the vaccine would be denied access to their offices.

Aside from the Federal Government, Edo and Ondo’s states made such pronouncements. And on December 1, the Presidential Steering Committee (PSC) on Covid-19 started enforcing the directive that employees of the Federal Government without evidence of being vaccinated or a negative PCR result did within 72 hours would be denied access into their offices.

Some persons who present evidence of being inoculated might not have taken any jab. And this is real. Lagos State Governor, Babajide Sanwo-Olu, recently alluded to this reality while providing Lagos Covid-19 management update.

Sanwo-Olu said: “It is also pertinent to mention at this point that we have received very disturbing information about intending outbound passengers procuring fake Covid test results and/or vaccination cards for travel purposes. This is a very worrisome trend for us to note and we are currently working with the NCDC, DSS and the Police to investigate and bring to book the criminal gangs involved in this reprehensible activity. We implore everyone to desist from patronising these gangs, as anyone found with a fake Covid test result and/or vaccination card will also be liable to prosecution and very stiff penalties.”

Also, the Presidential Steering Committee (PSC) on Covid-19 said some citizens were still deeply involved in fraudulently acquiring vaccination cards. At the national briefing of the PSC in Abuja, the Chairman, and Secretary to the Government of the Federation, Boss Mustapha, said: “We have received intelligence and even detected that some unscrupulous citizens are procuring vaccination cards through the black market. Let me assure everyone that the vaccination records/certificates will be verified, and this should serve as a warning to those criminally minded persons to desist because they will be prosecuted accordingly.”

Similarly, Head of, National Primary Health Care Development Agency (NPHCDA), Faisal Shuaib, said at a recent media briefing that a traveller, identified as Amako, was in possession of a vaccination card that could not be validated at the point of exit. He added: “Upon investigation, the reason for the non-validation was that the expiry dates of the 1st and 2nd doses were altered, there were inconsistencies with the vaccine expiration dates and batch numbers and the QR code scanned belonged to another person. “This clearly showed that Amako illegally obtained the vaccination card without getting vaccinated,” he said.

Shuaib said the suspect had been handed over to law enforcement authorities, and his full name would be released upon the conclusion of the investigation.

He warned Nigerians not to buy or sell vaccination cards, noting that it’s extremely difficult to use fraudulent cards abroad. Despite these warnings, the business of procuring vaccination cards by those who did not take a single dose of the Covid-19 vaccine is still on.

Procuring a vaccine card without receiving a jab in Owerri, Imo State
In Imo State, with N10,000 to N30,000, a Covid-19 vaccine card could be procured without taking the doses. The amount charged, according to findings, depends on the middlemen negotiating the deal.

During a visit to some health centres within Owerri and its suburbs, the officials on duty said it cost nothing to receive the vaccine. Attempts to negotiate to get the vaccine card without taking the jab were not successful. The health officials at the facilities denied it was possible to procure the card without receiving the jabs. Some of the health facilities visited were Naze Health Centre, Ugbele Health Centre, General Hospital, Orieubi; Federal Medical Centre, Nwaorieubi Health Centre, and Christiana Specialist Hospital, a private health facility.

A source at one of the facilities visited, however, said they were being careful as they did not know who they were chatting with. But it was gathered before the visit that some residents were receiving the vaccine cards without receiving a dose, although this was being done discretely, usually through middlemen who the health officials know.

The whistleblower provided the contact of a lady, Glory, said to either be the person doing it or facilitating the procurement of the card in one of the health centres. When Glory was informed about the deal being sought through a phone call, she was not forthcoming, maintaining it was not possible. After some persistence through a fixer, who spoke to her in Igbo, Glory agreed to meet physically but asked how her contact was supplied and by who.

At a meeting at ShopRite, located around Egbu Road, Glory later claimed she does not offer such services, especially since she did not know who provided her contact. She further claimed that it was curiosity that made her to play along and not that she was ready to help or could execute the deal. The whistleblower had earlier warned that her identity should be protected, otherwise she would not provide Glory’s contact. Glory seemed to have opted out of the deal.

Luckily, while leaving the health centre located within Owerri Municipal Local Council, Douglas Road, a man who had earlier enquired from the reporter what he wanted at the entrance of the local council, accosted him on his way and when the reporter told him what he wanted, he offered to help get the Covid-19 vaccine card even without receiving the jab. According to the man, who simply gave his name as Emeka, those in the city were always proving difficult, but he could procure the card within two days, as he needed to travel to one of the health centres in the suburb to execute the job. He added that if not for the short trip, it should be a day’s job.

He said he would meet the reporter at Naze 1, Poly junction, the next day for a proper discussion. He declined providing his telephone contacts, for his own safety, since he didn’t know who the reporter was.

After meeting the next day at the junction, he said his fee was N40,000 but after negotiation, it was reduced to N30,000. And to show seriousness, he demanded between N2,000 and N5,000 from the reporter, saying when he delivered the job, he would collect his balance of the deal. After a deal was sealed, he asked for the details of the person who needed the vaccine card. A pseudo name, fake date of birth, fake address, fake local council, but a real phone number was provided.

He asked the reporter to meet him at the same location by 4 p.m. the next day. And when the reporter got there, he was already waiting though he was standing across the road clutching a vaccine card.

When Emeka presented the card, unfortunately, the local council indicated on it was totally different from the one the reporter provided. But after paying Emeka his balance, he said he was always available at the entrance of the local council for business, boasting he could procure more and was willing to offer a commission to the reporter if he brings more business. Asked to make available his phone number, he said: “Oh boy, I still don’t know you, my spirit just say make I work with you. You know this thing na coded, even some of my guys do not know I am doing this. If you want to see me, come to where we met first, I am always there. Maybe after the next business, I go give you my phone number.”

Verification Portal confirms It’s genuine
The card showed that the two doses were received in September and October, five weeks in between. The first dose according to the card was received September 4 and the second jab was received October 7, though the card was procured late November. Also, some days after the card was received, the phone number provided for the deal got a text message stating the vaccination number and site.

Efforts to get the National Primary Healthcare Development Agency to speak on measures it is deploying to check fraudulent procurement of vaccine cards did not yield results. When the Public Relations Officer of the agency, Mohammed Ohitoto was contacted, he asked The Guardian to speak to one Amaka, whose phone number, he also provided. When Amaka was contacted, she referred the reporter to the National Primary Healthcare Development Agency’s Public Relations units. The PRO was notified of this development but did not respond to the message sent to him.