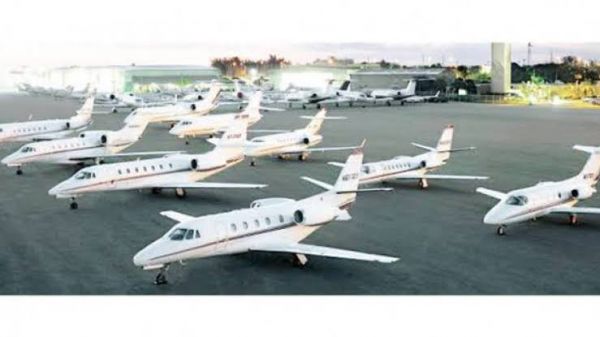 Federal Government has directed the Nigeria Customs Service to ground 91 private jets belonging to some wealthy Nigerians over their alleged refusal to pay import duties running to over N30 billion.

As such, the Comptroller-General of Customs, Hameed Ali, (retd.) following a directive from the Presidency, has written a letter to Nigerian Civil Aviation Authority, Federal Airports Authority of Nigeria, and the Nigerian Airspace Management Agency asking the agencies to ground the affected private jets with immediate effect.

Findings by our correspondent revealed that the letters were received by the aviation agencies on November 8, 2021.

The NCAA letter read in part, “The Federal Government in its drive for enhanced revenues has mandated the Nigeria Customs Service to immediately recover from defaulting private aircraft owners the required statutory import duties on their imported aircraft.

“You may wish to recall the verification exercise conducted by the NCS, initially scheduled for a 14 day period, but magnanimously extended over a 60-day period from 7th June through 6 August 2021, following a World Press Conference held on 31st May 2021. The outcome of the aforementioned verification exercise is a compilation of all private aircraft imported into the country without payment of statutory import duty.

It further read, “In this regard therefore, your full cooperation is being solicited to ensure the success of this initiative and that all such private aircraft owners or representatives are denied administrative and operational flight clearances indefinitely, until an NCS issued Aircraft Clearance Certificate is procured and presented to your organisation as proof of compliance.

“For the avoidance of doubt, ALL aircraft operated in accordance with the Nigerian Civil Aviation Authority’s regulation for the issuance of Permit for Non-Commercial Flight and those issued with Flight Operations Clearance Certificate and Maintenance Clearance Certificate accordingly are affected by this directive.

“Please find attached the list of all verified aircraft and indeed others of the Nigerian Civil Aviation Authority’s register, which may not have come forward for your record and necessary action. Strict compliance with this directive is to be ensured. Please accept the assurances of my highest regards and esteem as always.”

Independent findings by our correspondents revealed that some of the 91 private jets directed to be grounded belong to senior pastors of some popular Pentecostal churches in the country, some Tier-1 banks with one of the banks owning two upmarket jets, the chief executive officers of some indigenous oil companies, and the chairmen of some Tier-1 banks.

“The 91 private jets owe import duties in excess of N30bn and the Federal Government has directed that the Customs must recover this money. This is why we have sent demand notices to the private jet owners,” a Customs source privy to the development told one of our correspondents on condition of anonymity.

Findings by our correspondents revealed that the NCS had in March this year embarked on a review of import duties paid on private jets brought into the country since 2006.

Following the alleged discovery that several private jets owners, under the guise of Temporary Import Permit, had failed to pay the statutory import duty to the coffers of the government, the CG of Customs, Ali, set up a verification panel to review all TIPs and the relevant aircraft import documents of all private jets in the country.

At the end of the 60-day exercise, 57 private jets, which had licences for commercial charter operations, were cleared and issued Aircraft Operators Certificate by the Customs.

However, 29 private jets, whose owners came for the verification were found to be liable to pay the import duty.

The Customs also compiled a list of another 62 private jets whose owners failed to appear for the verification exercise but were found to be liable for import duty payment.

According to independent findings by our correspondents, some of the owners of the 91 jets have written protest letters to the NCS, arguing they cannot pay import duties on the planes because the jets are under lease payments.

The Customs, in its response to the letters, queried the rationale for bringing in the planes and allegedly fraudulently exporting them under questionable documentation processes in the past 10 years.

However, in a new twist to the development, there are strong indications that the Ministry of Aviation has directed the NCAA, FAAN and NAMA to suspend the grounding of the flight operations of the affected private jets, according to aviation sources.

Sources at the aviation agencies said the aviation ministry had directed the CEOs of the agencies to put the implementation of the NCS directive on hold until a clearance from the ministry was obtained.

The development could not be verified as of press time on Sunday but findings from the control towers and NAMA by The PUNCH revealed that some of the jets were still being cleared to fly.

When contacted on the matter, Director, Public Affairs, Federal Ministry of Aviation, James Odaudu, told one of our correspondents that he would find out if the letter from the customs was submitted to the ministry.

Odaudu said he was not aware of the position of aviation agencies on the matter and promised to make enquiries from the official who might have received the letter.

He said, “I cannot respond to that now because I don’t have the information. But if the Customs letter is in the ministry, I will find out tomorrow (Monday).

“When I get to the office tomorrow I can find out who is handling it and revert to you.”

Meanwhile, there are indications that the Customs may clash with the aviation ministry over the development as sources said the NCS officers might begin to impound the affected private jets any time soon.

A cursory look at the list of private jets shows that majority of them are upmarket aircraft.

Some of the jets go for over $50m each, according to finding by one of our correspondents.

Meanwhile, Chairman and Chief Executive Officer of Quits Aviation Services Limited, Sam Iwuajoku, had on October 13, 2021, said private jets operating in Nigeria ought not to be requested to pay any further levy.

Iwuajoku reportedly said the NCS ought to know that aircraft registered outside Nigeria does not operate permanently in the country and therefore ought not to pay the tax.

Iwuajoku, whose firm operates the Quits Aviation Services Free Trade Zone, spoke against the backdrop of the publication by the NCS on October 14, 2021, asking private jet owners to pay statutory import duties to the Federal Government.

“The amount of money these aircraft make for the Nigerian government is more than the cost of registration. They pay for their services in dollars, including landing and parking.

However, industry stakeholders say there are regulations requiring taxes to be paid on a private jet inasmuch as the aircraft is domiciled in the country or staying for a relatively long period of time, say 60 days or 180 days, depending on the laws of the country.