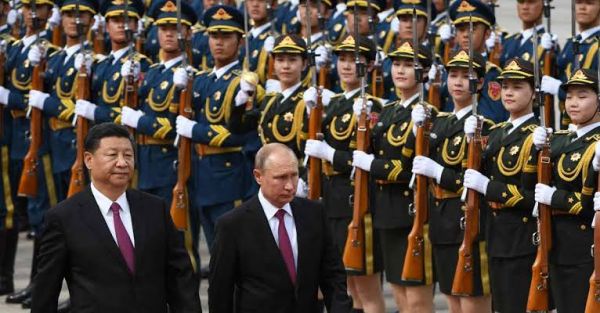 The vastness of Eurasia is becoming bracketed by belligerence. On the western front, Russia has deployed a growing number of military units to the regions near its border with Ukraine, inviting a flurry of speculation about its motives. And in the east, China’s behavior vis-à-vis Taiwan has grown increasingly worrisome. A widely reported war-game study by a US think tank concludes that the United States would have “few credible options” were China to launch a sustained attack against the island.

In both cases, the aggressor’s strategic intent is clear. Chinese President Xi Jinping’s government has made a point of calling for Chinese “reunification,” regarding that as a fitting conclusion to the Chinese civil war. After World War II, the Communist Party of China took over the Chinese mainland but failed to eliminate Chiang Kai-shek’s Nationalists. They retreated to Taiwan (and some smaller islands), which has remained outside CPC rule ever since.

Sometimes, China’s official declarations about “reunification” have stipulated that it should be achieved peacefully; but on other occasions, China’s leaders have dropped the adverb. Moreover, in expanding and equipping its military, China has focused specifically on building its capacity to subdue Taiwan if it ever tries to declare independence.

Most countries, including the US, have long maintained a “one China” policy, withholding formal recognition of Taiwan as an independent state. But in the absence of formal diplomatic ties with the island, many countries have developed relations through other channels such as trade and technology. Taiwan is a world leader in cutting-edge microchip production. It is also a shining democratic success story. If the Chinese society found in Taiwan can be democratic, perhaps the same political vision might someday be extended to the rest of China.

At the other end of Eurasia, Ukraine’s situation is radically different from that of Taiwan, not least because Russia has formally recognized its independence. Russian President Vladimir Putin’s occupation and annexation of Crimea in 2014 was declared illegal and condemned by an overwhelming majority in the United Nations General Assembly (where a mere 11 countries voted against the resolution).

Nonetheless, this past summer, Putin published a lengthy and remarkable essayarguing that Russia, Ukraine, and Belarus belong together as a matter of history. Ukrainian or Belarusian sovereignty, he now claims, can be achieved only together with Russia, under the ultimate authority of the Kremlin. So far-reaching is Putin’s revisionism that he even criticized Ukraine’s formally independent status under the Soviet constitution (not that this ever meant anything at the time).

Putin’s strategic intent is clear: he regards Ukraine’s independence as increasingly intolerable. Like China with its designs on Taiwan, Russia has been preparing and equipping its military for the specific purpose of invading and conquering Ukraine before any outside force can disrupt the occupation. In addition to seizing Crimea, the Kremlin has already sent regular military forces into Ukraine, as it did in August 2014 and again in February 2015 in the eastern Donbas region. Putin seems both ready and willing to launch another similar incursion, if not a much larger-scale operation.

No one doubts that a Chinese military takeover of Taiwan would radically change East Asia’s security order, just as a Russian military takeover of Ukraine would upend the security order of Europe. But what has not yet been fully appreciated is the possibility of both happening simultaneously in a more or less coordinated fashion. Taken together, these two acts of conquest would fundamentally shift the global balance of power, sounding the death knell for diplomatic and security arrangements that have underpinned global peace for decades.

Such a scenario is not as farfetched as it sounds. Although China claims to stand for non-interference in other countries’ internal affairs, it is scrupulously silent on the issue of Ukrainian sovereignty. There is no reason to think it wouldn’t back a renewed Russian assault on that country if doing so served its own purposes.

To be sure, it would be a massive mistake for China to invade Taiwan, and for Russia to invade Ukraine. Both countries’ economic development would be set back decisively by the large-scale sanctions that would inevitably follow. The risk of a wider military conflict would be high, and countries like Japan and India would almost certainly embark on a vast military buildup of their own to counter China. Europeans already are moving more decisively toward a policy of strengthening their defense.

As prudent as these developments may be, they offer cold comfort. The drums of war can be heard quite clearly. The task for diplomacy is to ensure that they do not become more than background noise.