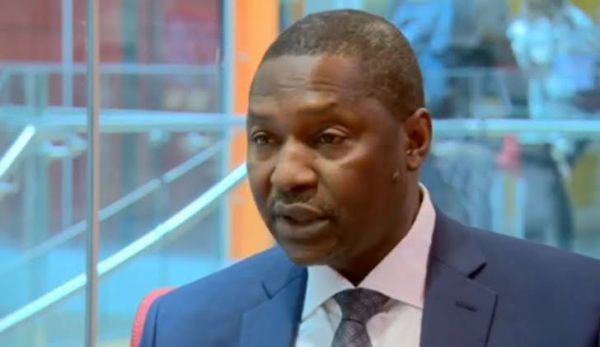 Following a ruling of the Federal High Court in Abuja on Thursday declaring bandits as terrorists, the Nigerian Air Force is set to deploy Super Tucano aircraft in the Northwest and Northcentral regions of the country, especially in Niger, Sokoto, Kebbi and Zamfara states.

The military had been reluctant to deploy the aircraft outside the Northeast because of the conditions attached to the sale of the aircraft by the United States, which was anchored on human rights.

But top sources in the military said the coast had become clear to deploy the Super Tucano aircraft against bandits in the Northwest and Northcentral, following the court order declaring them as terrorists.

Taiwo Taiwo of the Federal High Court in Abuja had, in a ruling on Thursday, declared activities of Yan Bindiga and Yan Ta’adda bandit groups as acts of terrorism.

The ruling followed an ex parte motion filed by Director of Public Prosecutions of the Federation, Mohammed Abubakar.

The DPPF told the court that the ex parte application was filed on the instructions of President Muhammadu Buhari.

In the affidavit filed in support of the ex parte application, it was averred that security reports confirmed that bandits were behind “incessant kidnappings for ransom, kidnapping for marriage, mass abductions of schoolchildren and other citizens, cattle rustling, enslavement, imprisonment, severe deprivation of physical liberty, torture, rape sexual slavery, enforced prostitution, forced pregnancy, other forms of sexual violence, attacks and killings in communities and commuters and wanton destruction of lives and property in Nigeria, particularly in the Northwest and Northcentral states in Nigeria.”

The affidavit added, “The activities of Yan Bindiga and Yan Ta’adda groups and other similar groups constitute acts of terrorism that can lead to a breakdown of public order and safety and is a threat to national security and the corporate existence of Nigeria.”

After entertaining the ex parte application, Taiwo declared activities of the Yan Bindiga, group” and the “Yan Ta’adda groups and other similar groups in any part of the country, especially in the Northwest and the Northcentral as “acts of terrorism and illegality.”

The judge also made “an order restraining any person or group of persons from participating in any manner whatsoever, in any form of activities involving or concerning the prosecution of the collective intention or otherwise of the Yan Bindiga group and the Yan Ta’adda group under any other name or platform however called or described.”

The court directed the Federal Government to publish the proscription order in the official gazette and two national dailies.

This newspaper had reported that in 2021, bandits had killed more people than Boko Haram.

This is said to have informed the decision of the National Assembly last month to call on the President to declare bandits as terrorists.

A top General told Saturday Punch on Friday, “We are waiting for instructions from the government for the next line of action. This was one of the things the Service Chiefs discussed with the President on Thursday morning. So, we await further instructions.”

When contacted, acting Director, Defence Media Operations, Bernard Onyeuko, however, said the announcement on the next step would be made at the appropriate time.

He said, “Wait for us, we would brief you people at the appropriate time. For now, allow us to do our work.”

Most of the states have been forced to shut telecommunications base stations, halting Internet and telephone services while in some instances petrol stations were shut along with land borders all in a bid to curb banditry.

In Kaduna State alone, the state government reported that between January and September 2021, no fewer than 888 people were killed while 2,553 were abducted.

Federal Government, on Friday, expressed its determination to crush bandits, who have for long held the country by the jugular, killing, maiming, kidnapping and rendering citizens homeless, particularly in the northern part of the country.

Attorney General of the Federation and Minister of Justice, Abubakar Malami expressed the Federal Government’s move in a statement on Friday by his Special Assistant on Media and Public Relations, Umar Gwandu.

The AGF, in the statement, titled, ‘FG moves to crush banditry, as court grants Malami’s application to declare bandits terrorists,’ said, “The government will gazette, publish and publicise the proscription order (against bandits).”

The AGF, said by obtaining the proscription order, the Federal Government “has taken bold steps to deal ruthlessly with all terrorists groups and their sponsors in efforts to bring lasting solution to the myriad of security challenges in the country.”

Malami said he would be “working assiduously” in collaboration with relevant government agencies, including security operatives “to do the needful to take full advantage of this declaration.”

Northern group welcomes the declaration of bandits as terrorists

The group expressed its excitement in a statement jointly signed by its President, Isah Abubakar, and Director General, Media and Publicity, Samuel Kure, on Friday.

NYCN said though it took the Federal Government almost an eternity to heed widespread calls to declare bandits as terrorists, it was better late than never.

It said, “We will welcome full military operation in Northwestern and Northcentral parts of the country as it is happening in the Northeast against Boko Haram and ISWAP elements which has drastically reduced their activities.”

The group urged the nation’s Armed Forces to take advantage of the court order to “crush anybody seen giving the terrorists moral support, be it materially, morally or otherwise, no matter how highly or lowly placed.”

“The northern youths will stand with you in your quest to stamp out terrorism from the North and Nigeria at large,” the group said.

But controversial Islamic scholar, Ahmad Gumi, who had been visiting bandits in the forests and advocating amnesty for them rather than military onslaught, said the court order declaring them as terrorists wouldn’t end banditry.

Gumi described the declaration as a mere decision taken for political expediency, adding that the Federal Government had finally succumbed to what he described as media blackmail.

The cleric’s view was contained in a statement on Friday by his media consultant, Malami Tukur Mamu, released in Kaduna.

In the statement, Gumi said, “I think the Federal Government has succumbed to media blackmail by a section of the country. It will not have any practical value because even before the declaration they were being fought and treated as terrorists.

“So, it’s just a nomenclature, which I believe will not change the dynamics on the ground.

“If you can remember, IPOB (Indigenous People of Biafra) was also declared a terrorist organisation; the declaration was even backed by the order of the court but as you can see, even the international community did not recognise FG’s declaration of IPOB. So, it has failed to be effective or to achieve the desired results.

“They have not been banned from travelling to other countries while their citizenship remains intact, it has not been denounced. So, what type of declaration is that? I sincerely hope that Nigerians will not take the herdsmen as terrorists but should regard the criminality of the few among them against innocent people as acts of terrorism just as we see IPOB and their attacks on security agencies and other northern citizens as acts of terrorism. Very few herdsmen are bandits if you go through their population.

Gumi maintained that based on his interactions with the bandits, dialogue, rather than military action, remained the best approach to solving the problem.

He added, “The Fulani banditry is a socio-economic problem. We have seen it, we interacted widely with them; we told the Federal Government the way out. It can only be won through engagement, dialogue and justice. That is why today there is relative peace in the Niger Delta because government has accepted the painful reality of rehabilitating and empowering them.”