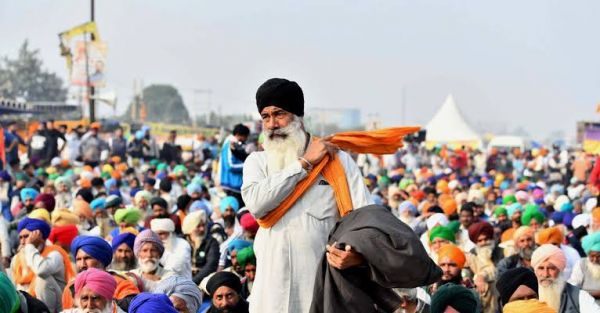 In a surprise reversal that follows more than a year of nonstop protests, Indian Prime Minister Narendra Modi has agreed to repeal three controversial lawsaffecting the country’s agricultural industry.

The laws, which sparked a massive protest movement after they were passed in September 2020, were designed to modernize India’s agriculture industry — but India’s farmers and other critics said they would advantage corporations at farmers’ expense.

Modi’s decision to back down is a key victory for farmers, whose protests have centered on the Indian capital of New Delhi, and a sign of growing dissatisfaction with the increasingly Hindu-nationalist Bharatiya Janata Party, which Modi leads.

“Today, I beg the forgiveness of my countrymen and say with a pure heart and honest mind that perhaps there was some shortcoming,” Modi said in a television address to the nation on Friday announcing the decision.

It was an unusual show of contrition for Modi, under whose leadership India has become increasingly authoritarian in than the more than seven years since he took office — and a neat bit of political theater, according to Angana Chatterji, an anthropologist at the University of California Berkeley.

“While promising to repeal three laws, Mr. Modi has not apologized for his structurally and socially flawed policies,” Chatterji said. “Backing down in the face of prolific and sustained dissent mounted by farmers, Modi admitted only to neglect and oversight in how the policies were messaged.”

Modi’s government has previously shrugged off criticism of some of his most alarming policies. The international community condemned his 2019 annexation of Kashmir — a contested, majority-Muslim region divided between India, Pakistan, and China — which nonetheless was led by its own state government until Modi changed India’s constitution, abolishing Kashmir’s long-held autonomy and forcing the citizens of the Indian territory into a months-long communications and information blackout.

The laws promised to open the agriculture market to commercial buyers, as opposed to the current system of government markets purchasing farmers’ goods and effectively guaranteeing them a minimum income. But as Vox’s Jariel Arvinexplained in December 2020, farmers feared this would subject them to the whims of the market and massive corporations and make it harder to make a living.

As year-long protests and Modi’s retreat from the issue demonstrate, government promises of continued stability and new market opportunities ultimately couldn’t sway India’s farmers, who are often already burdened with debt and lacking alternative sources of income. According to the Brand India Equity Foundation,58 percent of India’s population depends on the agriculture industry for its livelihood — and as Arvin explains, India has struggled to provide reasonable jobs in alternative sectors, despite the fact that agriculture brings in only about 18 percent of India’s GDP.

Beyond just being a victory for India’s disadvantaged farmers, however, Modi’s contrition tells a bigger story about his government, its recent failings, and the state of India’s flagging democracy.

India’s agriculture system has for decades operated under a subsidy system — farmers grow food and other agricultural products and the government purchases them at a specific price from the farmers to sell internally or export, providing them with a guaranteed income. Since most farmers in India — 82 percent in 2018, according to the UN’s Food and Agriculture Organization — are small family farmers, not large corporate farms, their incomes are extremely precarious and contingent on the ability of the government to provide a minimum basic income for their crops.

Prior to the controversy over the farm laws, farmers in India already struggled with suicides — sometimes due to insurmountable debt, crop failure, and the volatility of food prices. That kind of despair, combined with few alternatives for careers that can adequately support a family, particularly in rural areas of the country, put farmers in an untenable position exacerbated by last year’s attempted farm reforms.

As Sadanand Dhume, a resident fellow at the American Enterprise Institute and an expert on South Asia, explained to Vox late last year, India’s agricultural system — and its economy more generally — requires significant change in order to keep up with global markets and provide an adequate standard of living for India’s population.

“If the economy were creating jobs, then there wouldn’t be as much anxiety,” Dhume said. However, “because job creation [in India] has been so weak, the thought of losing the guarantee is unsettling for farmers.”

Massive protests started soon after laws were passed, with farmers from all around the country — including Punjab, one of the country’s major grain suppliers, and Uttar Pradesh, the most populous state — congregating outside New Delhi.

International media coverage of the protests brought attention to the farmers’ cause, as did comments by Western celebrities like Rihanna and climate activist Greta Thunberg, and protesters built encampments that remained through the winter, despite occasional violence and a deadly wave of Covid-19 cases.

According to Harinder Happy, a spokesperson for Samyukta Kisan Morcha, the United Front of Farmers’ Unions, “at least 670 protesters have died” over the duration of the protests from a number of causes, including exposure, Covid-19, and suicide.

In October this year, four protesters also died when a car registered to a government minister plowed into a protesting crowd in Uttar Pradesh; previously, farmers had begun following BJP politicians as they campaigned in Uttar Pradesh in an extension of the protest movement centered on New Delhi.

Modi’s reversal on the farm laws is unusual for a strongman who has rammed through legislation that violates human rights and has previously faced international condemnation.

Under Modi, India has experienced a surge in Hindu nationalism, with deadly consequences for the country’s religious minorities. That nationalism has translated into political success for Modi — he won reelection in 2019 by a landslide on an overtly “Hindu-first” platform, as the AP described at the time. But his government’s response to the Covid-19 crisis — first shutting down much of India’s economy, then downplaying widespread suffering as crematoriums and hospitals overflowed during the nation’s deadly second wave — have weakened his standing nationally.

That weakness was underscored earlier this year in the Indian state of West Bengal, where Modi’s BJP lost decisively in local elections that saw Covid-19 become a major issue, and worries about the farm laws becoming an additional political vulnerability may have driven Modi’s decision to back down now.

“The repeal, which if enacted will partially reframe his damaging economic policy, comes in the face of the forthcoming Uttar Pradesh elections of 2022,” Chatterji told Vox over email. “Winning [Uttar Pradesh] is hyper critical for the Hindu nationalist BJP to continue their experiment in absolute nationalism in India.”

Protesters in both Uttar Pradesh and Punjab have already shown forceful opposition to BJP policy and an ability to organize a credible offense against them — and some experts say Modi’s decision to change course now may not be enough to repair the damage already done.

“The government is likely to spin this as the PM listening to the people, but after a year of hard protest, acrimony and violence, it’s going to be difficult to make that notion adhere,” Gilles Verniers, a political science professor at Ashoka University in India, told the AP this week.

Despite his missteps, however, Modi appears likely to remain in office for the time being. “While this presents an opening for the political opposition, it remains to be seen if the flailing Congress Party and its allies can galvanize a comeback,” Chatterji said.

The success of the farm law protests could mark a shift, though: Given the large proportion of India’s nearly 1.4 billion people who are engaged in the agriculture industry, the movement certainly had the numbers to mount a serious challenge, and Happy, the farmers’ union spokesperson, says the protesters have built a sustained movement to meet the demands of the agricultural sector.

The protest “was not just about [repealing] the laws, we had other demands as well,” he told Vox, including legislation to enshrine a minimum support price for agricultural goods. “Those demands are still pending.”

Currently, India’s parliament is set to convene later this month, at which point Modi said Friday that legislators “will begin the procedure” of repealing the laws.

In his Friday speech announcing the end of the new farm laws, Modi also told the protesters that they could go home and urged them to “start afresh”; as Happy told Vox, however, that’s not happening any time soon.

“We had a meeting of core committee today and have prepared some resolutions,” Happy said, and another meeting of the General Body of the United Farmers Front on the group’s next steps is scheduled for Sunday — all while protesters remain on the outskirts of Delhi, intending to agitate until the laws are repealed and the rest of their demands are met.

“We will keep fighting until then,” Happy told Vox.