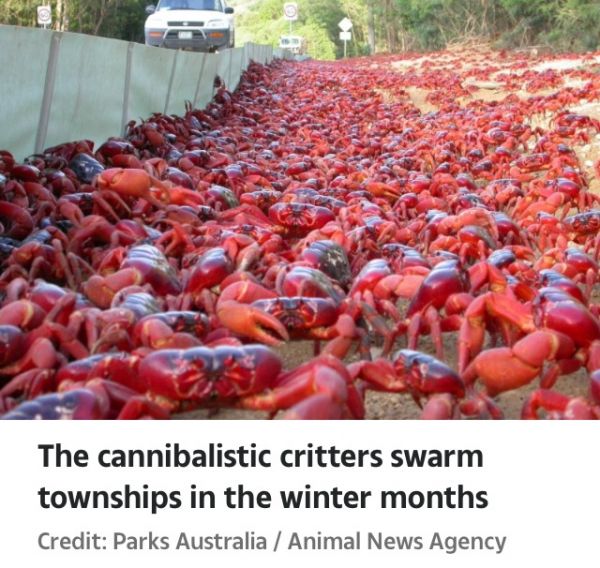 Millions of red crabs descended on roads and bridges in Australia’s Christmas Island as part of their yearly migration towards the ocean, shutting certain routes down.

The tiny island in northwestern Australia witnesses the migration every year of all of its crab population, estimated at about 50 million, the highest in the world.

The mesmerising view of crabs taking over large stretches of roads and parks catches the attention of residents and visitors who are once again racing to capture photos and videos of the migration.

The cannibalistic crabs all start their journey from the forest at the same time after the rainfall in October-November, and march towards the ocean near the national park to mate and spawn.

They also move through residential areas on their long journey in what is considered one of the largest migrations on the planet.

In photos and videos shared by Parks Australia, the organisation that manages the country’s six national parks and other marine and botanical gardens, the red crabs can be seen at the door of an office.

“With red crab migration in full swing on Christmas Island, the crabs are turning up everywhere, including at the door of an office block! Our staff have been out managing traffic, raking crabs off roads and providing updates to the community on road closures,” the tweet said.

Authorities spend weeks preparing for this migration as routes are blocked and visitors are asked to park their cars carefully.

Male crabs lead the way and reach the ocean coast first, followed by females, which can produce as many as a hundred thousand eggs during the mating season that they stay with in burrows for two weeks.

The timing of the migration depends on rainfall and the phase of the moon. Somehow the crabs know exactly when to leave their burrows in time to spawn before dawn on a receding tide during the moon’s last quarter.

This year, they are expected to reach the coast by the end of this month.