The Cantillon Effect: How the rich get richer 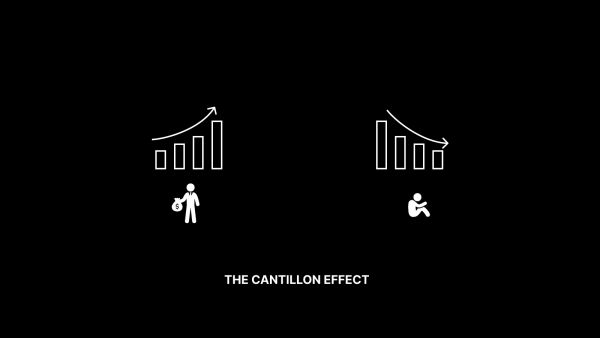 The Cantillon Effect is the most important economic concept you’ve likely never heard of.

Here’s a simple breakdown of the Cantillon Effect—what it is, how it works, and why you should care.

Richard Cantillon was an Irish-French economist and philosopher born in the 1680s.

He is something of a mystery man—not much is known about his life. Early in his career, he achieved material success as a banker and merchant—success that historians have attributed to the formidable political and business connections Cantillon made through his family and employer.

This fact would prove relevant to his work later in life. At a young age, he had learned of the impact and importance of proximity to power...

In the early 1700s, Cantillon is believed to have accumulated significant wealth through speculation in a variety of ventures, including John Law’s infamous Mississippi Company (which would collapse spectacularly).

Around 1730, influenced by his experience to date, Cantillon wrote a paper—Essai Sur La Nature Du Commerce En Général (translation: Essay on the Nature of Commerce in General)—today considered a foundational work in the study of the political economy. It is a broad, overarching paper with significant contributions to the study of economics.

While it achieved wide circulation in manuscript form, it was not published until 1755, well after his death in a house fire in 1734.

While recognized for a variety of insights and contributions, Essai is most well known for its discussion of the distributional consequences of new money creation and the concept of relative inflation.

In the paper, Cantillon posited that the early recipients of new money entering an economy will benefit more significantly than those it trickles down to.

In other words, the "flow path" of the new money through a system matters.

Broadly speaking, Cantillon noted that new money creates disproportionate effects based on where it enters the system.

The Cantillon Effect was born...

To bring this theory to life, let's walk through a (very) simple story to illustrate Cantillon's central point.

Imagine you live in a tiny, enclosed island society.

One morning, you wake up to find a small package on your doorstep. You open it up and gasp—it has $1 million in it.

Great! But now what?

No one else knows you received this package. You now secretly have $1 million new dollars. Naturally, you start spending it (and maybe investing it) quickly. Prices are still low, because no one knows these new dollars exist yet!

Your standard of living improves rapidly. You buy yourself the nicest house, the most beautiful clothes, and a bunch of land.

But now, the other island inhabitants start to see and feel this new money flowing through the system. Prices begin to rise as demand surges but supply has yet to "catch up" to the new consumption. It takes time for supply to ramp.

So while the money improved your life, it didn’t benefit others in the same way:

You benefitted materially from the new money, but they didn’t. There were distributional effects—the flow path of this new money mattered!

This is—quite obviously—an ultra-simplified example, but it gets at the essence of the problem that Cantillon highlighted almost 300 years ago: Proximity to the source of new money is relevant—the entry point and flow path have distributional consequences.

But why should you care about all of this today?

The Cantillon Effect in Action

Well, with the "money printing" activity of central banks globally and an ever expanding wealth inequality problem, mentions of the Cantillon Effect have accelerated.

It's a useful framework through which to evaluate the monetary and fiscal response to Covid (and any future inevitable crises).

The simplistic view of what I see today:

The asset purchases—and rock-bottom interest rates, among other things—generally benefit asset owners (the wealthy). Those with a significant portion of their net worth in equities, real estate, or similar assets have benefitted tremendously over the last 18 months.

Wage earners—who received some degree of support via direct stimulus but did not benefit in the same way from the asset appreciation—are seemingly getting the short end of the stick.

Inflation—particularly across food and energy prices—will have a disproportionate impact on their standard of living.

By now, everyone has heard that inflation is running hot in the U.S. But perhaps more importantly, it's also running disproportionately hot.

So what do you think? Was Cantillon right? Are there clear distributional consequences to these new money policies that must be considered? And if so, what can we do about it?

I hope this piece provides you with a solid foundation of understanding on the Cantillon Effect.

My goal is for this to be educational, not political. In my view, this should not be a political debate—it should be a grounded discussion we all have when we consider the impact of various monetary and fiscal policies proposed by our leaders.