#EndSARS report: US, UN, others call for sanctions on indicted individuals, entities 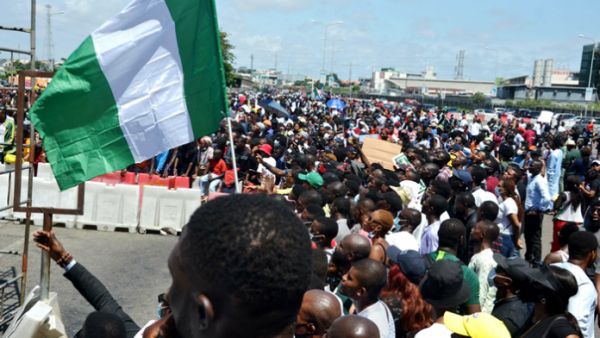 The United States Government as well as several human rights groups, including Amnesty International, on Tuesday called for action on the report of the Lagos State Judicial Panel of Inquiry on Restitution for Victims of SARS Related Abuses and other matters, which stated that at least nine persons were killed and 39 others injured at the Lekki toll plaza on October 20, 2020.

However, the Nigerian Army and the Federal Government refused to comment on the report, which was submitted to Governor Babajide Sanwo-Olu on Monday.

The panel, led by Doris Okuwobi, also recommended that all soldiers (excluding Major General Omata), who were deployed in the Lekki tollgate, should be made to face appropriate disciplinary action, stripped of their ranks and dismissed as they were not fit and proper to serve in any public or security service of the nation.

Responding to the report on Tuesday, the United States Mission to Nigeria said it welcomed the final report by the panel, adding that it awaits the response of both the Federal Government and the Lagos State Government.

It said in a statement, “The United States welcomes the conclusion of the Lagos State Judicial Panel of Inquiry with the transmission of its final report. We look forward to the Lagos State Government’s response as part of a process that represents an important mechanism of accountability regarding the #EndSARS protests and the events that took place near the Lekki tollgate on October 20, 2020.

“Those events led to serious allegations against some members of the security forces, and we look forward to the Lagos State and federal governments taking suitable measures to address those alleged abuses as well as the grievances of the victims and their families.”

The United Nations Resident and Humanitarian Coordinator for Nigeria, Edward Kallon, noted that the submission of the findings of the judicial panel would accelerate the process of justice and accountability.

Kallon in a statement on Tuesday titled, ‘United Nations welcomes the submission of #EndSARS report, urges government’s commitment to implementing judicial panel’s recommendations’, said the implementation of the findings would help rebuild trust and start the process of healing and reconciliation.

Kallon said, “I welcome the submission to the Lagos State Governor, Babajide Sanwo-Olu, of the reports of the judicial panel on claims of brutality and shooting in the Lekki area of Lagos State during the 2020 #EndSARS protests.

“I urge the government to implement the recommendations of the judicial panel of inquiry to rebuild trust and start the process of healing and reconciliation.”

Human rights lawyer, Femi Falana in a statement, recommended that the report of the panel be forwarded to President Muhammadu Buhari.

Falana, who is the Interim Chair, Alliance on Surviving Covid-19 and Beyond, said this in a statement titled, ‘Lagos State is Duty Bound to Implement the Recommendations of the Okuwobi Judicial Commission of Inquiry’.

The activist said members of the panel deserved commendation for the thorough investigation of police brutality in Lagos State.

He stated, “In particular, the revelation that some of the 99 dead bodies dumped in the various mortuaries in Lagos by soldiers were traced to the Lekki tollgate has exposed the official lie that the report of the brutal killings was a figment of the imagination of the protesters.

“A certified copy of the report of the panel should be forwarded to President Muhammadu Buhari in view of the recommendation that the soldiers and police personnel, who engaged in the torture and reckless murder of citizens, be sanctioned.”

He urged the state government to accelerate the issuance of the White Paper as well as the implementation of the far-reaching recommendations.

The activist said the policemen, who were killed by criminal elements during the protests, should be honoured notwithstanding that their family members had been compensated by the Lagos State Government.

“The violent attack on unarmed protesters during peaceful rallies by police and military personnel should be completely outlawed since Section 83 (4) of the Police Establishment Act, 2020 has imposed a duty on the police to provide adequate security for citizens, who participate in peaceful meetings and rallies,” Falana said.

Global rights group, Amnesty International, hailed the report, insisting that those indicted by the panel must be brought to justice.

Amnesty said this in a statement titled, ‘Nigeria: Perpetrators must Face Justice after #EndSARS Panel Confirms Shootings of Protesters at Lekki Tollgate’.

In the statement, Director, Amnesty International Nigeria, Osai Ojigho, said the panel’s findings revealed the truth about what happened at Lekki tollgate and contradicted the blatant denial by the Nigerian government that deadly force was used against peaceful protesters.

Amnesty recalled that a day after the crackdown, it conducted its own on-the-ground investigation, which confirmed that the Nigerian Army and the police killed at least 12 peaceful protesters in Lekki and Alausa, with evidence gathered from eyewitnesses, video footage and hospital reports.

The statement read in part, “For the survivors and relatives of the dead, the judicial panel’s report findings are only the first step towards justice and restitution. Buhari must act promptly to ensure that those found to be responsible for shooting and attacks on peaceful protesters are brought to justice in fair trial.

“Nigerian authorities must ensure access to justice and effective remedies, including adequate compensation, restitution and guarantee of non-repetition to victims and their families. The authorities must also immediately and unconditionally release all #EndSARS protesters unlawfully detained since last year.”

Chief of Defence Staff, Lucky Irabor, faulted the procedure adopted for the release of the report of the panel, stating that the issuance of a White Paper was the standard method.

Irabor said he could not, at the moment, comment on the content of the document, because he had not seen the official report and could not confirm the authenticity of the leaked one.

The CDS stated this during a courtesy visit to the Edo State Governor, Godwin Obaseki, in Benin City on Tuesday.

Responding to a question, he said, “I am sure those of you in the media must have seen a report that was released through, in my view, a wrong channel, that is making the rounds in the social media. Whether it is a true report, I can’t tell.

“But I’d like to indicate that the normal procedure is to have such a report submitted to the convening authority. Then, there will be a White Paper that will be presented, based on which one can make informed comments.”

Irabor, however, maintained the Nigerian military was professional and remained committed to its constitutional mandate.

He added, “So, we will not at this point think that Nigerians should make disparaging remarks regarding the Armed Forces of Nigeria in the sense that we are professional. If there are issues, of course, we will address them within the ambit of the provisions of the law.

“It will not be right to disparage the men and women, who have worked so hard to ensure that the territorial integrity of this nation is kept intact.”