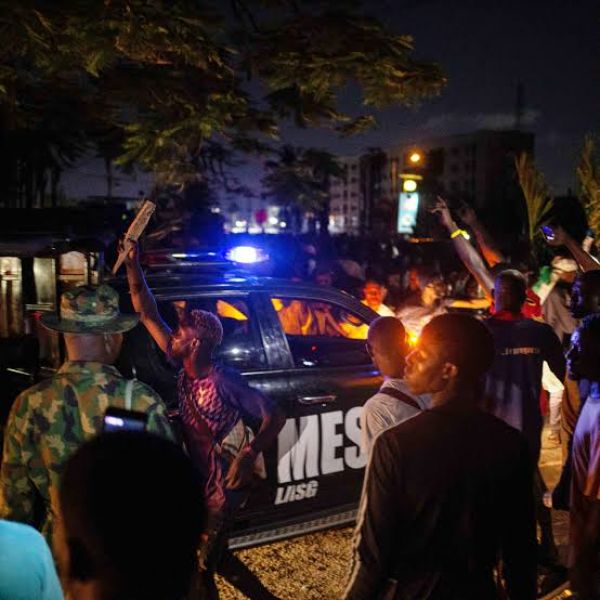 Tens of thousands of Nigerians took to the streets last October calling for the Special Anti-Robbery Squad (Sars) police unit to be disbanded.

The report, leaked on Monday, has identified 48 casualties after the army opened fire on the demonstrators.

The #EndSARS protests rocked the country for two weeks. The police unit had been accused of robbing, attacking and even killing people.

According to the report by the inquiry panel, soldiers intentionally shot at protesters on 20 October at the Lekki toll gate in Lagos.

It also found that after the army retreated, police officers continued the violence and tried to clean up the scene, taking bodies away on trucks and removing bullets.

Some of the findings match previous reports by Amnesty International, as well as local and international media.

Out of the 48 casualties listed by the panel, 47 victims are males while one is female.

The panel also said the killing of unarmed protesters at the tollgate could be described in the context of a “massacre”.

“It was alleged and corroborated that the soldiers had their vans parked at the Lekki Toll Gate and removed as many bodies and corpses of the fallen,” the report reads.

“One of the protesters who was shot and taken for dead, Olalekan Sanusi, who eventually escaped to narrate his ordeal and experience stated that 11 corpses were in the van where he was placed in and presumed dead.

“Miss Dabira Ayuku also corroborated the above by stating that she saw about 7 dead bodies placed in one of the military trucks at the Lekki Toll Gate on the night of 20th October, 2020.

“Three (3) trucks with brushes underneath were brought to the Lekki Toll Gate in the morning of October 21st October, 2020 to clean up the scene of bloodstains and other evidence.

“There was abundant evidence before the panel that the Lagos State Waste Management Authority (LAWMA) indicated in its Twitter handle that it had effectively cleaned up the Lekki Toll Gate scene immediately after the incident of October 20, 2020.

“The denial of ambulances by the soldiers, which could have assisted in the prompt and effective treatment of injured protesters, was cruel and inhuman and it contributed immensely to the large number of deaths and casualties on the part of the protesters, especially those from the Lekki Toll Gate.

Lagos State Governor Babajide Sanwo-Olu, who set up the panel, has promised a "proper response" to the findings.

"This process will help us start the very difficult process of proper reconciliation, restitution, bringing together of anyone... affected," he said.

A white paper on the findings will be released within the next two weeks, Sanwo-Olu said.

The government's response to the protests drew global condemnation, leading to the disbandment of the Sars unit.

Amnesty International has said authorities in the country have continued to intimidate and harass protest organisers since the incident.