eNaira - what about it? Here are 10 key points to know about Nigeria’s digital currency 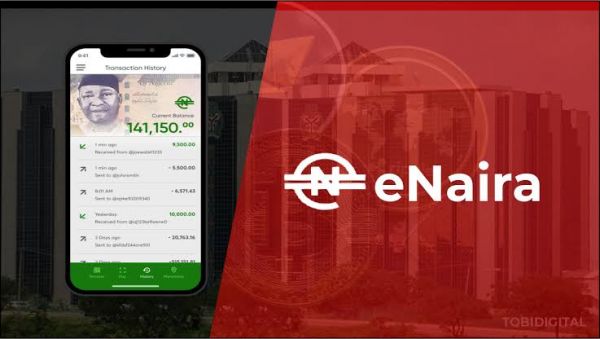 The eNaira was developed by the fintech company, Bitt, based in the Carribeans.

At the launch on Monday, Central Bank of Nigeria governor, Godwin Emefiele, said 500 million eNaira ($1.21 million) had already been minted.

Nigeria is one of only a few countries in the world and certainly the first in Africa to develop an official digital currency.

While the currency has taken off, many Nigerians say they still do not understand how it operates and why the country needs a digital currency in the first place.

Here are 10 major things you should know about the eNaira and how it works:

1. It’s the digital form of the Naira

The eNaira is the digital form of the Nigerian physical Naira currently in circulation. It is issued by the CBN in line with Section 19 of the CBN Act. In essence, it is a direct liability of the Nigerian apex bank. Built on a blockchain open ledger technology that prevents duplication or creation of fake units, each eNaira note will be unique and different.

2. Is the eNaira same as Cryptocurrency?

No, it isn’t. The eNaira is simply a digital currency issued and backed by the authority of the Nigerian government and is a legal tender equivalent to the physical cash. It is quite unlike Bitcoin and other cryptocurrencies that have no backing of established authorities. The eNaira is pegged against the traditional Naira and will not fluctuate due to market influence at a different rate from the traditional Naira. The eNaira basically eases transactions and offers digital stability, thus reducing the need for physical cash.

The eNaira is a legal tender and will form part of the currency-in-circulation. More importantly, the e-naira will be at par with the physical Naira, maintaining the same exchange value as the Naira What this means is that one eNaira is of the same value with one traditional Naira i.e N1=1 eNaira.

5. How exactly will eNaira work?

The eNaira will be provided by the CBN to intermediaries (i.e financial institutions) who would in turn help supply to individuals/customers. These institutions would maintain a treasury wallet to collect eNaira from the CBN. They would thereafter oversee ID verification, eNaira payment processing, and generation of wallets for Nigerians to keep their eNaira. Through the app, customers would be able to identify a bank of their choice, connect to their bank accounts and carry out transactions.

6. Are there transaction or/and balance limits?

Yes, there are transaction and balance limits for individual eNaira wallets. These have been drawn out by the CBN.

7. How do you onboard and make use of the platform?

Yes, there are various requirements for onboarding. The onboarding of Financial Institutions (FIs) shall be done automatically by the CBN while Merchants shall be onboarded by the FIs upon downloading the “eNaira Speed Merchant App” from the app stores and fulfillment of certain registration requirements.

The MDAs shall be onboarded by the CBN upon receipt of the appropriate mandate.

8. Are there charges for using the eNaira platform?

The CBN said that charges for transactions that originate from the eNaira platform shall be free for the first 90 days commencing from October 25, 2021. However, it would revert to applicable charges as outlined in the Guide to Charges by Banks, Other Financial and Non-bank Financial Institutions.

9. Why eNaira in the first place?

The eNaira is expected to complement traditional Naira as a less costly, more efficient, generally acceptable, safe and trusted means of payment. In addition, the CBN said in its guide that it will improve monetary policy effectiveness, enhance government’s capacity to deploy targeted social interventions and boost remittances through formal channels. There is the elimination of third party in transactions which could reduce time and cost of transactions. More importantly, there is the ease with which it would complement inclusion of excluded people in the financial system.

10. Who will be affected by the digital disruption?

For the last category, merchants and businesses, the registration requirement include full KYC requirement (including BVN, TIN and Bank confirmation) and compliance with the Anti-money laundering and counterfeit terrorism regulation of the CBN.