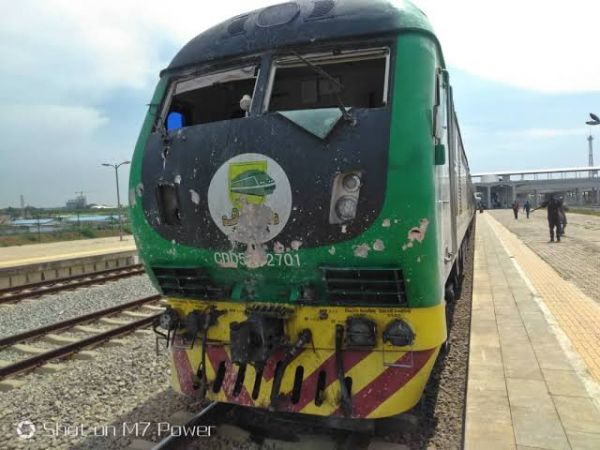 Nigerian Railway Corporation (NRC) has confirmed that suspected bandits on Wednesday destroyed a portion of the Abuja-Kaduna rail track with explosives, forcing a disruption of train services on the route.

According to the Managing Director of the NRC, Fidet Okhiria, explosives damaged the rail track at a spot between Dutse and Rijana, an area that had recorded numerous bandits’ attacks along the Kaduna Abuja highway.

Okhiria said the Corporation was making efforts to restore train services on the route.

“Efforts are currently ongoing to ensure that the train services along the Kaduna-Abuja route are fully restored,” the official said.

Earlier, a former senator representing Kaduna Central district, Shehu Sani, had reported on his Facebook page that suspected bandits attacked the Kaduna-Abuja train. He said the bandits planted an explosive that damaged the rail track and shattered the windshield of the train’s engine, Wednesday evening.

Sani said the gunmen also opened fire at the train on Thursday morning, targeting the driver and the tank of the train. “It happened between Dutse and Rijana stations. The Driver struggled to move towards Kaduna Rigasa station.

“This early morning, I was on board when our train ran over another explosive damaged railings. The train nearly skid off its track, then we miraculously escaped. All Kaduna Abuja train operations need to be suspended for today until this issue is addressed,” Sani wrote.

A staffer of the NRC quoted by Daily Nigerian newspaper said the attack was deadly.

“The bandits first attacked the last Abuja-Kaduna train bearing number AK9 between Rijana and Dutse. The train came under heavy gunfire, but it struggled to stutter for about seven kilometres and stopped as the gunshots damaged the fuel tank,” the newspaper quoted the unnamed staff.

“At the point of the attack, the train was unable to make contact with Abuja. Hours later, contact was made and a relief locomotive arrived past midnight.

“And then the morning train from Kaduna to Abuja, bearing number KA2, also ran over fractured rail tracks, but successfully completed the journey. Suspected explosives devices were planted on the track, but God in his infinite mercy saved the travellers and train.”

The NRC had earlier on Monday announced the reduction of regular transportation of passengers on the route from 10 trips to four daily, citing maintenance work.

Pictures circulating on social media showed a shattered front window of the train, damages to the coaches and people who were inspecting destroyed parts of the rail line.

Some travellers are opting to travel by rail after several people were kidnapped by armed bandits on some of Nigeria's highways, especially in the northwest of the country.

Nigeria is battling an Islamist insurgency in the northeast and armed bandits who have kidnapped hundreds of students, travellers and villagers for ransom, leaving the population terrified.