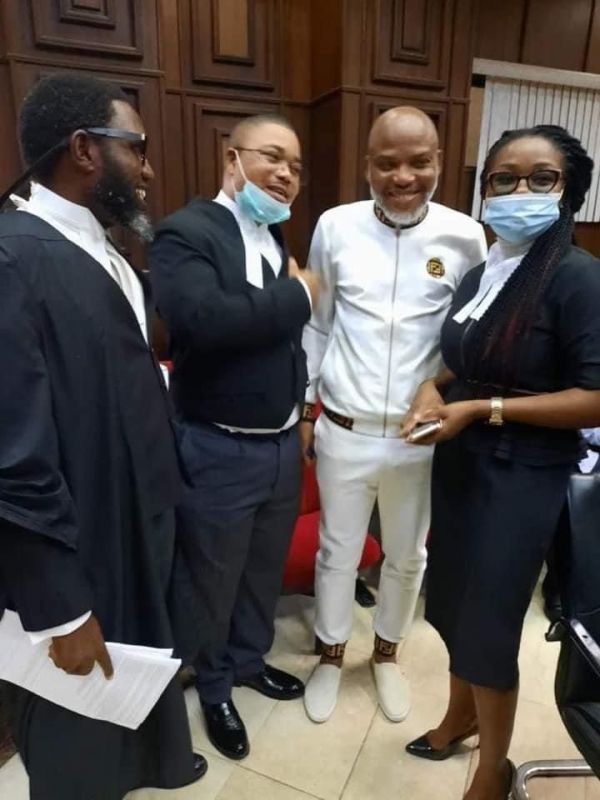 Leader of Indigenous People of Biafra (IPOB) Nnamdi Kanu pleaded not guilty to charges including terrorism in an Abuja court on Thursday, three months after his trial was delayed when authorities failed to produce him in court.

The charges against Kanu, a British citizen, also included calling for secession, knowingly broadcasting falsehoods about President Muhammadu Buhari, and membership of an outlawed group.

IPOB wants a swathe of the southeast, homeland of the Igbo ethnic group, to split from Nigeria. An attempt to secede in 1967 as the Republic of Biafra triggered a three-year civil war that killed more than 1 million people.

Security services barred journalists from entering the court and forcibly dispersed crowds of supporters who gathered nearby.

In selfies with his lawyer circulating in local media, Kanu looked healthy and in good spirits.

Kanu was first arrested in 2015, but disappeared while on bail in April 2017. His social media posts during his absence, and his Radio Biafra broadcasts, outraged the government, which they said encouraged attacks on security forces.

Security agents produced him in court in Abuja on June 29 after detaining him in an undisclosed country. His lawyer alleged he was detained and mistreated in Kenya, though Kenya has denied involvement.

Kanu has filed charges alleging that he was illegally taken from Kenya and asking that he be repatriated to Britain.

On Thursday, his lawyers also asked, unsuccessfully, for Kanu to be transferred to the Nigerian Correctional Centre instead of the state security custody for easier access to his lawyers.

Kanu's lawyer, Ifeanyi Ejiofor, said they have an application challenging the competence of the underlying charges, most of which reference Radio Biafra broadcasts made out of London.

"I can't see how someone would make a statement in London and it becomes a triable offence in this country," Ejiofor told reporters.

The trial was adjourned until Nov. 10.