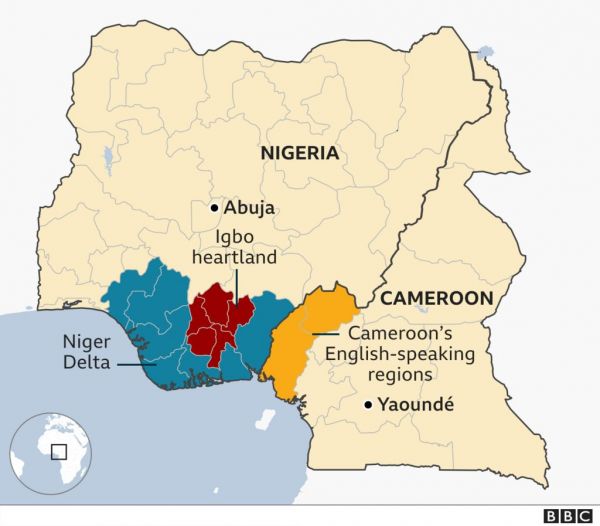 Cameroon's five-year conflict could be taking a significant new turn with reports that its English-speaking separatist groups are getting help from an armed group in neighbouring Nigeria.

After two attacks by Anglophone militants which cost the lives of 15 Cameroonian soldiers last month, the army issued a statement declaring that "the separatists have used heavy weapons for the first time, in violation of international humanitarian law".

It went on to add that "the rise in power of these terrorist groups... is largely due to their co-operation with other terrorist entities operating outside the country".

Contacted by the BBC, Cameroonian defence forces spokesperson Cyrille Atonfack Nguemo did not specify which foreign groups were allegedly working with the Anglophone separatists, who say they face discrimination in the country dominated by French-speakers.

It is therefore unclear whether the military believes it is one or several armed groups, and also where they are located.

But the separatist Ambazonia Defense Forces (ADF) has confirmed an alliance with the Indigenous People of Biafra (IPOB), an ethnic Igbo group waging a sometimes violent campaign for autonomy in southeastern Nigeria, some of which lies just 150km (90 miles) from the border with Cameroon's English-speaking regions.

A video posted on the ADF Facebook page earlier this year shows Cho Ayaba, leader of the Ambazonia Governing Council - one of the two main English-speaking separatist groups, and IPOB leader Nnamdi Kanu announcing a "strategic and military" alliance.

Both separatist leaders explained that the two groups would "work to secure their common border and ensure an open exchange of arms, intelligence and personnel".

How big a deal is this?

Analysts are divided. "For the moment, the contribution of this alliance on the ground in the Anglophone zone is not yet clear," says Elvis Arrey, senior analyst for Cameroon at the research group International Crisis Group (ICG).

However, Raoul Sumo Tayo, a historian and security analyst in the region, says it should not be downplayed, as it offers both groups rear bases where they can retreat, beyond the reach of their respective countries' armed forces.

This is especially significant in Cameroon, where he said the "army was practically absent [from the areas hit by conflict] before the insurgency and therefore has extremely limited knowledge of the area".

The two countries have previously discussed giving each other's security forces the right to cross the border, especially when chasing members of the Boko Haram Islamist militant group further north, but a deal was never reached.

Where do the heavy weapons come from?

The Cameroon authorities have not gone into much detail about what kind of weapons they say are being used, beyond briefly referring to anti-tank missiles and rocket launchers.

Some actually come from attacks on the defence and security forces, says the ICG's Arrey.

"Other weapons come from Nigeria," he adds.

According to Tayo, even "before the crisis in the Anglophone regions, the Niger Delta area was an important hub for arms trafficking in the sub-region".

Weapons bound for the Anglophone region of Cameroon have often been seized by the Nigerian authorities.

Over the past three years, scores of people have been arrested on charges of trafficking arms to Cameroon.

Tayo believes that some weapons are likely to come from "countries with a large Anglophone diaspora". Some Cameroonians from English-speaking regions have been charged in the US with alleged arms trafficking, although none has yet been convicted.

IPOB has this year been accused of ransacking police stations and stealing weapons, which could potentially be smuggled across the border.

How easy is it to cross the border?

Even before the latest unrest in the two countries, the border areas were poorly controlled on both sides.

It is partly made up of the Niger Delta, a huge forested area full of creeks and inlets and multiple clandestine ports, which borders both English-speaking Cameroon and the Igbo heartland, where most IPOB attacks are concentrated.

There are ethnic and cultural ties between some groups found on either side of the border, which could further smooth links.

What are the Cameroonian authorities doing?

The government in Yaoundé seems to be concerned about the situation and has announced a strategic change in its military intervention in the area, without giving details.

At the end of August, the two countries agreed to step up security along their 2,000km (1,240 mile)-long border, which is threatened by the separatists, as well as by Boko Haram.

The two countries also co-operated when Cameroonian separatist leader Julius Sisiku Tabe and eight others were arrested in the Nigerian capital, Abuja, in 2017.

They were sent back to Cameroon where they were given life sentences for terrorism and other crimes, which they are challenging.

What is the fighting about?

Both Nigeria's Igbo community and English-speaking Cameroonians have long complained of discrimination by their respective governments.

The Igbos declared the independence of Biafra from Nigeria in 1967, sparking a war that ended in 1970 following the death of an estimated one million people.

Although the federal army won, Nnamdi Kanu's IPOB is the latest group to take up the Igbo cause. He was arrested in June and is currently in detention on charges of treason, which he denies.

Scores of people have been killed in unrest over the past year.

In Cameroon, protests by English-speaking lawyers and teachers in 2016 over laws they saw as favouring the French language escalated into a full-blown separatist conflict, with some groups declaring the independence of what they call Ambazonia the following year.

Amid reports of atrocities on both sides, the conflict has caused thousands of deaths and forced hundreds of thousands to flee their homes - many have crossed over into Nigeria.

Why does Cameroon have both English- and French-speakers?

■   On 1 January 1960, the French colony of Cameroun gained independence and became Cameroon.

■   The UK also controlled the former German colony of Cameroon. At independence, its citizens were given a choice of joining either Nigeria or Cameroon.