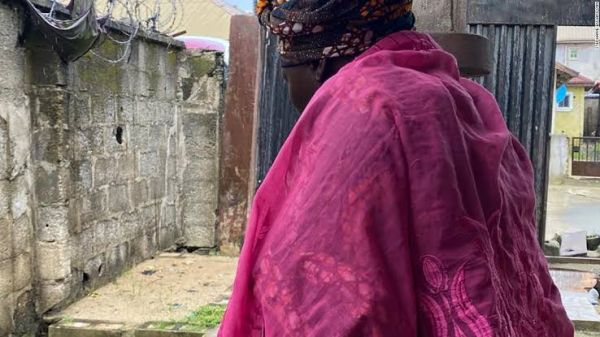 When Adesola heard about the shooting at the Lekki toll gate in Lagos on October 20, 2020, she immediately thought of her son who had earlier left home to join the hundreds of young people protesting against police brutality at the site.

In a blind panic, she called his phone, but there was no answer. She immediately hailed a passing motorcycle taxi, known locally as an Okada, and raced to the scene.

But nothing could have prepared her for the harrowing scenes she witnessed when she got there, she said.

"While I was looking for my son... I saw people running and someone was in the gutter and had an iron bar in his eye. The person was already dead," she recalled.

One year on from the shooting by security forces that quashed Nigeria's fledgling youth protest movement, known as #EndSARS, Adesola (not her real name) is speaking to CNN on the condition of anonymity, for fear of recriminations.

We have also withheld her son's name at her request.

"We got there around 5 or 6 am," she said in her first sit-down interview. "We saw a lot of people. There was a child holding a Nigerian flag lying dead, there was a bullet wound on the side of his body.

"He was a small boy and there were a lot of people there," she told CNN from a makeshift wooden structure where she ekes out a living selling cold beverages.

'He died in my arms'

As Adesola surveyed the scenes of chaos and stepped over the hastily discarded belongings of panicked protesters, she spotted a familiar figure lying in a pool of blood on the ground, wearing just one shoe.

"When I saw my son, I shouted and held him... The blood was too much, there was a bullet wound on his chest. His clothes were torn and the bullet had come out of his back," she said, weeping as she recounted the painful moment.

Despite his injuries, she discovered her son was still alive.

"I saw other people carrying their relatives, so I tried to carry him because he was still breathing at that moment. I called for help and people came to help me put him in a vehicle," she said.

"He was looking at us while we were carrying him. He was just screaming 'ah, ah,' in pain."

They tried desperately to revive him in the car, but he didn't make it, she told CNN.

"He died in my arms," Adesola said. "I was shouting and I couldn't keep calm."

Her son was buried almost immediately in line with Muslim burial rites.

He was 32 and left behind two children, 14 and nine, who had also lost their mother in undisclosed circumstances a few years earlier.

Adesola says she is thankful she was able to find her son's body. Others were not so fortunate.

CNN spoke to several families during an investigation last year who were yet to locate the bodies of their missing loved ones -- protesters at the toll gate -- who dozens of eyewitnesses say were shot at, first by members of the Nigerian army and then hours later by police.

Wisdom Okon's relatives told CNN last year he went missing after he went to the toll gate. He is still missing.

Witnesses told CNN that ambulances were stopped from entering by Nigerian authorities.

There is no official death toll, but an Amnesty International investigation found that at least 12 people died at Lekki toll gate and another site on October 20.

Eyewitnesses told CNN they saw the army remove a number of bodies from the scene.

The CNN investigation pieced together what happened when the Nigerian army and later the police opened fire on civilians as they protested police brutality.

It used time stamps, video data, and geolocation to analyze hours of video shot by protesters -- tracking the army's movements to the Lekki toll gate where protests had been taking place for almost two weeks.

Video shot by an eyewitness appears to show the army shooting toward the crowd. The Nigerian government threatened to sanction CNN for its report.

The Nigerian Army's account of what happened has shifted over time.

In the immediate aftermath of the shooting, the army denied any involvement, describing reports of the incident as "fake news," before backtracking and saying that soldiers were present but fired their weapons in the air and used blanks.

It said that hoodlums were mixed into the crowds of protesters.

On November 14, during a judicial inquiry into the shooting, army representative Brigadier Ahmed Taiwo (who has since been promoted to the rank of major general) admitted that the soldiers at the scene had live rounds but continued to deny that anyone was shot.

"There's no way officers and men will kill their brothers and sisters. I repeat no way. We have those who constantly seek to drive a wedge between us and between the citizens of Nigeria...," he said at the time.

Protesters and witnesses posted several videos in which bullet casings were displayed which they say were recovered from the scene.

At the time of the incident, police denied shooting anyone.

CNN has made renewed attempts to obtain comments for this latest report from the Nigerian armed forces, police, and the federal government, but has received no response.

The #EndSARS protests lasted for nearly two weeks in October 2020 before they were silenced by the shooting at the Lekki toll gate.

Angry young Nigerians took to the streets, blocking major roads across cities in Africa's most populous nation, in largely peaceful protests. They marched in tens of thousands chanting "Enough is Enough" against police brutality and violence.

Their initial demands were for a notorious police unit known as the Special Anti-Robbery Squad, or SARS, to be shut down, but the marches morphed into protests campaigning for police reform and an end to bad governance in the oil-rich country.

During the protests, participants erected tents and DJ booths at various sites across the country and held multi-faith prayer sessions as well as a "festival of lights," to honor the victims of police brutality, held at the now-infamous Lekki toll gate.

Adesola questions why the protesters were dispersed with such brutal force that night.

"Even if the government wanted to chase them from the place, they were not supposed to shoot. They could have asked them to stop and not shoot. Everyone could have found their way."

Adesola says her son took part in the protests as "a concerned Nigerian," and in what would be their final phone call, he described a scene of calm where people were protesting peacefully and had come prepared to camp overnight.

"All his mates had been going there and when he came back from work on that day, he said he was going to join his friends. When he got there, he called me and said a lot of people were there. Some were sleeping there with their mattress and had brought their cooking gas. If the soldiers did not come, things would have gone well without any problems," she said.

One year on from the Lekki toll gate shootings, and no one has taken responsibility for what happened that night, nor has anyone been held to account.

In a short report released Tuesday, titled "Nigeria: A Year On, No Justice for #EndSARS Crackdown," Human Rights Watch said: "The prospects for accountability remain inconclusive and bleak. Nigerian authorities should take concrete and decisive steps to ensure that those implicated in abuses against protesters are held accountable."

The judicial hearing set up in October 2020 by the Lagos state government to look into cases of police brutality -- and the now-disbanded Special Anti-Robbery Squad -- and to investigate the tollgate incident has been beset with delays and other issues.

Last month, it abruptly suspended sitting, saying it did not have enough time to complete its reports on the cases, including the Lekki shooting. It reopened briefly a few weeks later to hear additional testimonies and ended its sitting Monday. However, its report is still being prepared.

"Nigeria's authorities should take effective steps toward accountability to show victims that their loss, pain, and suffering is not in vain," said Anietie Ewang, Nigeria researcher at Human Rights Watch.

"Anything less will worsen distrust of the government and reinforce the perception that the lives of citizens do not matter."

Many Nigerians believe the issues that drew the protests 12 months ago still persist -- and those who were there that fateful night are still seeking justice.

DJ Switch, a local musician whose real name is Obianuju Catherine Udeh, was at the protest and live-streamed much of the evening on her Instagram page.

A year later she recalls how she thought they were all going to die. "I thought it was the end for all of us there. You know, I mean when you sing the national anthem and wave your flag, your Nigerian flag, and the shooting doesn't stop, you only have one thought left in your mind," she said.

Soon after the shootings, DJ Switch says she had to flee Nigeria, afraid for her safety, and she hasn't been back since.

"Justice is there waiting to be done, who's going to do it? Young people are asking every day for accountability, who's willing to be responsible -- to take responsibility," she said.

Now Adesola is picking up the pieces after her eldest son's death.

Asked what she would say if she could talk directly to the Nigerian government, she said: "I will say to them the same thing I am saying to you.

"I cannot be lying about my child's death. I will show them his grave."