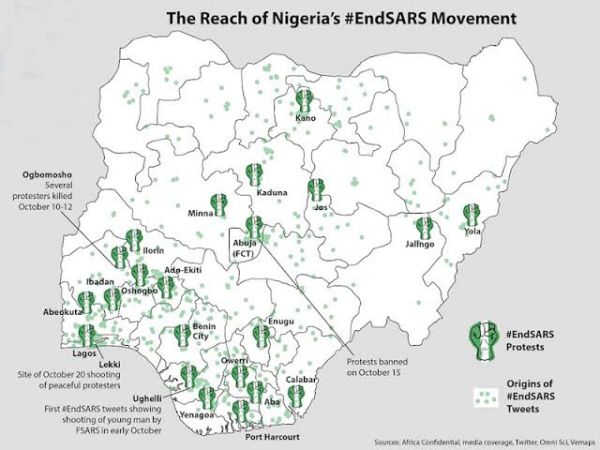 In October 2020, Nigerians started what can be termed the biggest campaign against police brutality in the country.

Although the campaign started on social media, Nigerian youths eventually took to the streets in some parts of the country to protest against the now-disbanded special anti-robbery squad (SARS), a unit of the Nigerian Police Force.

In the course of the protest, tagged #EndSARS, donations were made from different parts of the world.

Feminist Coalition — a group set up by about 14 women —  said it received N147,855,788.28 as of October 22, 2020 through crowdfunding and spent part of the money on legal services for those protesters who were arrested, to pay medical bills for those wounded, to provide private security at protest points and daily refreshments.

The group said the rest of the funds were used to provide support, including mental health counselling, for victims of police brutality and the families of those who died.

However, the protest continued, with activists issuing a five-point demand which include:

In addition to the dissolution of SARS, the federal government on October 13 accepted the five-point demand of the #EndSARS protesters.

One year on, what is policing like without SARS?

Upon the disbandment of SARS, a new squad, Special Weapons and Tactics (SWAT) unit was formed.

He also gave the assurance that no personnel of the defunct SARS will be selected to be part of the new TACTICAL team.

However, a year after, the unit is yet to commence operations.

Although Muhammad Dingyadi, minister of police affairs, said officers of SWAT team have been deployed in state commands, Alkali Baba, IGP, said SWAT is yet to commence operations.

Baba also said the vacuum created by SARS has made it difficult for the police to tackle most of the violent crimes in the country.

On the planned recruitment of 10,000 new police personnel, TheCable reached out to the Police Service Commission (PSC) which is the body in charge of police recruitment, promotion, and exercising disciplinary control over the police.

Ikechukwu Ani, spokesperson of the commission, said: “The commission and the police are already meeting. Very soon, there will be an announcement to conclude the 2020 recruitment that was done after the appeal court judgment in 2020.”

On psychological evaluation for officers which is one of the demands of the protesters, Ani said: “Details are being worked out. It is not yet defined but I know that we must obey the president’s directive.”

THE POLICE BECAME VULNERABLE TO ATTACKS

In May, The Punch reported that more than 25 police stations were attacked in parts of the south-east and south-south between January and May.

Reports also showed that over 127 policemen and other security personnel were killed during the attacks.

The IGP said the morale of police officers in the country has been low since the protest in October 2020.

DID EXTRA-JUDICIAL KILLINGS BY POLICE STOP?

Did the disbandment of SARS curb the rate of police brutality and extra judicial killings in the country?

Citing a report by Global Rights, an international human rights organisation based in Washington DC, THISDAY reported that despite the #EndSARS protest against police brutality, Nigeria recorded 164 cases of extra-judicial killing between January and September 2021.

According to the report, with this rising trajectory, the country may record more cases of extra-judicial killing in the current year than the 271 incidents documented in 2020.

The report claimed that there were 14 cases of extra-judicial killing in January; three in February;  six in March, six in April, nine in May; 12 in June, 23 in July; 14 in August and 77 in September.

Besides cases of killing such as the case of Monsurat Ojuade, an 18-year-old girl, who was shot on September 10 at Mogaji street, Ijesha, Surulere, Lagos during a raid by operatives of the state criminal investigation and intelligence department, several videos posted on social media show police officers threatening citizens for failing to give a bribe.

President Muhammadu Buhari in 2018 approved an enhanced salary structure for officers of the Nigerian Police Force.

In line with one of the demands of the protesters for an upward review of salaries of officers, the president directed the National Salaries, Income and Wages Commission to finalise the new salary structure for members of the force.

However, to date, there are no indications that it has been implemented.

The police public relations officer said he was too preoccupied to speak when contacted by TheCable.

Many protesters were arrested during and after the EndSARS protest. With mass sharing of information on social media, some were able to secure bail with the support of other protesters. Some others detained for months, including Kemisola Ogunniyi, an 18-year-old girl. Kemisola who said she was not part of the protest in Akure, Ondo state, gave birth to a baby while she was in prison for eight months.

Still, there are claims that more people are still in detention over the protest.

Gavel, a non-governmental organisation that advocates citizens’ rights, told TheCable that at least 33 persons are still being detained in Lagos alone, over the protest.

“At the moment, we can authoritatively confirm that there are at least 33 defendants languishing in Kirikiri Correctional Centre since the #EndSARS period which Gavel is working on. This information, however, is subject to change as there may be more undocumented cases in Lagos and across other states,” the NGO said.

In response to one of the #5For5  demands, the National Economic Council (NEC) chaired by the vice-president directed the establishment of judicial panels of inquiry by state governors in Nigeria to investigate complaints of police brutality and extra-judicial killings.

In compliance with the directive, 29 states and the FCT set up judicial panels of inquiry with over 2791 petitions received.

However, despite the directive, seven states — Borno, Jigawa, Kano, Kebbi, Sokoto, Yobe, and Zamfara States — did not establish the panels.

Over the past one year, 25 states — Abia, Adamawa, Akwa Ibom, Bauchi, Bayelsa, Cross River, Delta, Ebonyi, Edo, Ekiti, Gombe, Imo, Kaduna, Katsina, Kwara, Lagos, Nasarawa, Niger, Ogun, Ondo, Osun, Oyo, Plateau, Rivers and Taraba — have concluded sittings. But only Abia, Bayelsa, Cross River, Ekiti, Ondo and Nasarawa state judicial panels of inquiry have submitted and publicly presented reports to the state governments for the implementation of their recommendations. Bayelsa, Ekiti and Ondo are the only states of which reports are available to the public.

Four states — Anambra, Benue, Enugu, Kogi, and the FCT — suspended sitting for reasons that could not be independently verified by TheCable, causing delay in justice and leaving many petitioners stranded.

COMPENSATION OF VICTIMS BUT NO PROSECUTION OF CULPABLE OFFICERS

Monetary compensations have been awarded by the judicial panels set up in different states to victims of police brutality.

However, some petitioners have complained that the sums are paltry compared to the ill-treatment they suffered.

A petitioner who was awarded the sum of N7.5 million had caused an uproar at the panel sitting, saying the money was not enough.

The petitioner, who is a shop owner at Alaba international market, had told the panel how officers of the now-disbanded SARS came to his shop in 2018 and threw him from a two-storeyed building, leaving his spinal cord damaged.

Only mobile with the aid of a wheelchair, the petitioner said he spent more than N30 million to treat himself, adding that his shop has become empty.

According to a statement issued by Laolu Akande, spokesperson to the vice-president, at a meeting held on Friday, National Economic Council (NEC) said the federal government and states will set up modalities for the settlement of compensations awarded to victims of police brutality.

The council also directed state governors to immediately forward copies of final reports of the panels to their attorneys-general for prompt arraignment and prosecution of all indicted persons.

However, a source who was a member of one of the judicial panels told TheCable that tracking down some of the indicted police officers has been difficult. He said while some petitioners cannot identify specific officers who brutalised them, the police also could not provide the whereabouts of some of their officers.