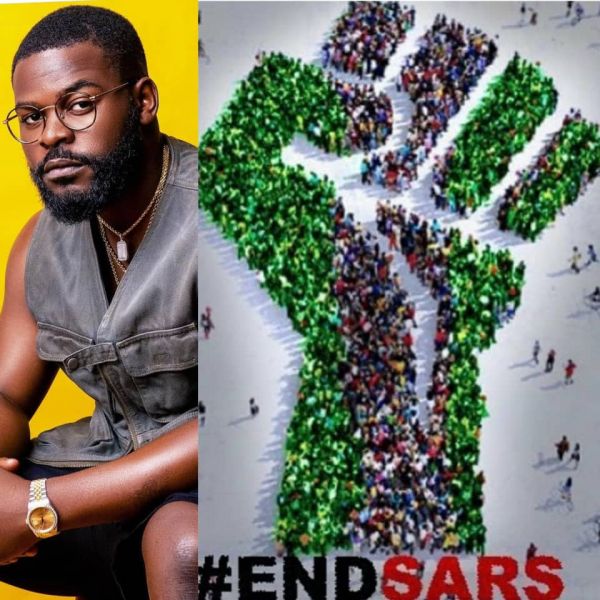 Organisers of the #EndSARS anniversary protests in Lagos said on Tuesday they would embark on a two-hour car procession through the Lekki Tollgate.

The decision followed the insistence of the Police Command on its  ”no street protests” in any part of the state.

Two of the organisers — Folarin Falana and Adebowale Adedayo —  made this known via social media posts yesterday. Falana, a musician popularly known as Falz, is the son of a Senior Advocate of Nigeria and rights activist, Femi Falana, Adedayo is a comedian known as Mr Macoroni.

The Abuja protests will be led by the 2019 presidential candidate of the African Action Congress (AAC), Omoyele Sowore, and an activist, Deji Adeyanju.

Falala and Adedayo, who used their various platforms to share fliers about the carpool billed to hold between 8 am and 10 am today, explained that the decision was to prevent security forces from harassing participants.

They vowed that the youth cannot be silenced and would not be forced to forget those who lost their lives last October 20.

Urging Nigerians with vehicles to join the protests, Falana said it was impossible not to “memorialise our fallen heroes.”

He wrote: “We will never ever forget that innocent Nigerian citizens waved flags and sang till they were shot at, injured, and killed.

“We must never forget. We are rolling up in cars tomorrow to drive through the tollgate. We know their way, so a procession of cars is the safest option to minimize police harassment.

“We will stay in our vehicles throughout. We have rides for people that need them. Each and everyone’s safety is very important, so please let’s move together.”

His father, Femi Falana, lend his voice to the protests, saying that if there was no provocation by the government today, there would be no violence in any part of the country.

Sowore, in a brief interview with The Nation, said ”We will commence the protest at the Unity Fountain, Abuja by 8 in the morning.”

Adeyanju, who confirmed that the protests would begin from the Unity Fountain, added: “I don’t think we need to inform the police about the  protests.”

From fliers that went viral on social media, The Nation observed that the organisers in states such as Lagos, Abia, Adamawa, Bayelsa, Delta, Edo, Enugu, Kwara, Oyo, Ondo, Plateau, and Rivers have perfected plans for the protests.

Kwara protesters will be meeting at Challenge Junction while the candlelight procession is to be held at Point Post Office Under Bridge.

Enugu protesters are to meet at Okpara Square. Protesters in Rivers State will converge at the Waterlines, Port Harcourt.

For Adamawa State, the protesters will converge at the Bekaji Parliament, Yola while those in Bayelsa have planned to hold the protest at Etegwe NIIT Road By Boro-pit, Yenagoa.

Also yesterday, Falana told reporters said he believes that there would be no violence if the protesters were not provoked by the government

“I can tell you if there is no provocation by the government tomorrow (today), there will be no violence in the country,” he said during the comparative lecture and public presentation of remaking Nigeria: Sixty Years, Sixty Voices.

The theme of the lecture was “One Year After #EndSARS, 35 Years After Dele Giwa and The Quest to Remake Nigeria.”

Falana added; “If you also recall what happened last year, the violence was instigated by the government and sponsored by the government. I am sure you saw some of the criminal elements in Abuja who were ferried all over the place shooting at protesters.”

“In Alausa here, a busload of thugs armed to the teeth were unleashed on protesters so if the government does not want to cause violence, rallies will take place peacefully,”