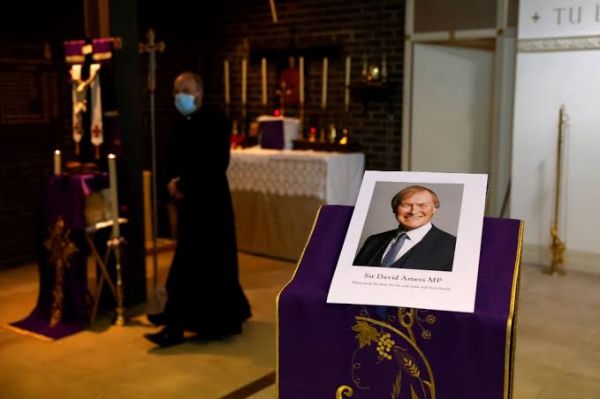 The killing of Conservative MP David Amess has been declared a terrorist incident by police.

David was stabbed multiple times at a constituency surgery in Leigh-on-Sea in Essex on Friday.

The Metropolitan Police said there was "a potential motivation linked to Islamist extremism".

A 25-year-old British man was arrested at the scene on suspicion of murder, and police said they were not seeking anyone else over the death.

As part of the investigation, officers are currently carrying out searches at two addresses in the London area, the Met said.

The force believes the man acted alone but inquiries into the circumstances of the incident are continuing.

The man is in custody in Essex, police added.

Government sources have told the BBC he is a British national who, from initial inquiries, appears to be of Somali heritage.

David, 69, who represented Southend West, was holding a constituency surgery - where voters can meet their MP and discuss concerns - at Belfairs Methodist Church on Friday when he was attacked at 12:05 BST.

The Met said its counter-terrorism officers were working with colleagues from Essex Police and the Eastern Region Specialist Operations Unit (ERSOU).

"The fatal stabbing in Leigh-on-Sea has tonight been declared as a terrorist incident, with the investigation being led by Counter Terrorism Policing," the force said.

"The early investigation has revealed a potential motivation linked to Islamist extremism."

Officers are appealing for anyone with any information about the incident, or those who have footage from CCTV, dash cams or video doorbell, to contact them.

Patel said the killing "represents a senseless attack on democracy itself", adding that "questions are rightly being asked about the safety of our country's elected representatives".

David had been an MP since 1983 and was married with five children. He is the second serving MP to be killed in the past five years, following the murder of Labour MP Jo Cox in 2016.

Prime Minister Boris Johnson described him as "one of the kindest, nicest, most gentle people in politics".

We expect the MPs we elect to see us in person, not to hide behind Parliament's ornate gates and wood-panelled walls.

That demand is met gladly by the vast majority of MPs.

But, increasingly, the job has been accompanied by abuse, intimidation - and risk for MPs and their staff.

Dealing with harassment, coping with security concerns and reporting those concerns to the police, is sadly routine in politics in the 21st Century.

It is inevitable in the coming days that there will be calls for a kinder atmosphere at Westminster, and cooler heads in real life, and online.

It is not, however, inevitable that anything at all will change.

House of Commons speaker Lindsay Hoyle told BBC2's Newsnight that police were contacting all MPs to check on their security and reassure them following the killing of Sir David.

He said he had gone ahead with his constituency surgery as normal on Friday evening and said it was essential that MPs were able to retain their relationship with their constituents.

"We have got to make sure that democracy survives this," he said.

But Conservative MP Tobias Elwood told BBC Radio 4's The World Tonight he would recommend that no MP should have face-to-face meetings with constituents following the stabbing of David.

"You can move to Zoom... you can actually achieve an awful lot over the telephone," he said.

And Kim Leadbeater, the sister of Ms Cox and MP for Batley and Spen, said her partner had asked her to stand down from her role following David's death.

Who was Sir David Amess?

A Conservative backbencher for nearly forty years, Sir David entered Parliament in 1983 as the MP for Basildon.

He held the seat in 1992, but switched to nearby Southend West at the 1997 election.

Raised as a Roman Catholic, he was known politically as a social conservative and as a prominent campaigner against abortion and on animal welfare issues.

He was also known for his championing of Southend, including a long-running campaign to win city status for the town.

Meanwhile, tributes have been paid to David from across politics and within his local community.

PM Boris Johnson said he had an "outstanding record of passing laws to help the most vulnerable", adding "we've lost today a fine public servant and a much loved-friend and colleague".

Jeff Woolnough, parish priest at nearby St Peter's Catholic Church, described David as "a great, great man, a good catholic and a friend to all".

He led a mass at the church on Friday evening in memory of David, describing him as "Mr Southend".

And Labour leader Keir Starmer said it was a "dark and shocking day", adding that the country had "been here before" with the death of Jo Cox.