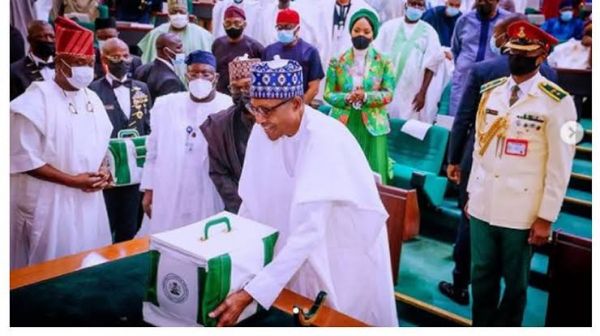 President Muhammadu Buhari unveiled a record N16.39 trillion ($39.8 billion) budget for 2022 on Thursday, with a projected 25% year-on-year rise in government spending as the economy struggles with the impact of the pandemic.

The deficit will rise to N6.26 trillion, or 3.39% of GDP to be funded by new borrowing, proceeds from privatisations and drawdowns on loans secured for specific projects, Buhari told a joint sitting of the Senate and the House of Representatives.

The plan for Africa's top oil exporter assumes crude output of 1.88 million barrels a day and an oil price of $57 per barrel, said Buhari.

"Some have expressed concern over our resort to borrowing to finance our fiscal gaps. They are right to be concerned. However, we believe that the debt level of the Federal Government is still within sustainable limits," he said.

Economic analysts said Nigeria's budget signaled the government was not about to make any major policy shift as spending would remain elevated to deal with a deteriorating security situation in many parts of the country.

The armed forces have been struggling to contain Islamist insurgencies in the northeast, a spate of mass abductions and deadly bandit attacks in the northwest, conflicts between farmers and herders in many areas and a general surge in crime.

"In the meantime, Nigeria is likely to be stuck with large budget deficits. If borrowing conditions prove to be unfavourable, the government may increasingly lean on the central bank to finance budget shortfalls," said Virag Forizs, emerging markets economist at Capital Economics.

The World Bank has said that rising insecurity, along with high food inflation and stalled reforms, was a drag on growth and a factor in rising poverty.

The economy is projected to grow by up to 3% this year after it expanded by 5% in the second quarter. It contracted in 2020 due to the pandemic, though it managed to exit recession in the fourth quarter, but growth is fragile.

Buhari confirmed a previously published 2022 GDP growth forecast of 4.2% and an inflation projection of 13%.

"Our target over the medium term is to grow our revenue-to-GDP ratio from about 8 percent currently to 15 percent by 2025," Buhari said. This would be achieved by enhancing tax and excise revenues through reforms and administration measures, he added.

Nigeria has passed a string of record budgets since Buhari took office in 2015, but the country has struggled to fund the spending plans due to low revenues. The pandemic has added to the revenue problems.

According to IMF data, Nigeria has among the lowest revenues globally, with general government revenue between 2015 and 2019 at 7.9% of GDP, compared with a Sub-Saharan African average of 12.7% and a global average of 29.8%.

Buhari said a fuel subsidy which successive governments have tried unsuccessfully to scrap, continued to erode revenues. Attempts to remove it have triggered protests and strikes.