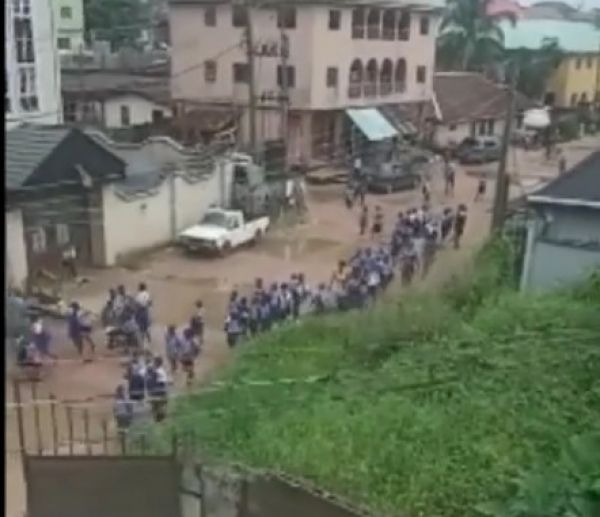 There was utter confusion in Owerri, Imo State capital, as gunmen suspected to be members of the Indigenous Peoples of Biafra (IPOB) enforced the sit-at-home order.

The gunmen, who stormed streets and markets in Owerri, forced traders to close shops.

They shot sporadically in the air to scarce people and motorists.

Motorists quickly made U-turn while many passengers disembarked.

Some vehicles collided with one another as driver made frantic moves to turn back.

The confusion, which started at Wethral road, spread to neighbouring Mbaise road, Douglas road and Naze along Aba- Owerri road.

Traders at the multi-million Alaba International market and Naze Cluster markets quickly closed their shops and locked the entrances leading to the market.

Hoodlums took advantage of the situation to scatter some wares already displayed by shop owners who fled.

Schools immediately closed while parents rushed to pick up their children.

It was not immediately known what actually happened, but our correspondent gathered that the gunmen had arrived Owerri from Aba ostensibly to enforce the order in Imo.

Spokesman of Imo state police command, Mike Abattam, was not available for comments.

There has been apprehension in the  Southeast since IPOB declared its weekly sit-at-home order.

Although spokesman of the group, Emma Powerful, had said the group had cancelled the weekly order, some members of the organisation were said to have vowed to continue to enforce it.