Why Karl Marx’s Communist Manifesto is having a moment 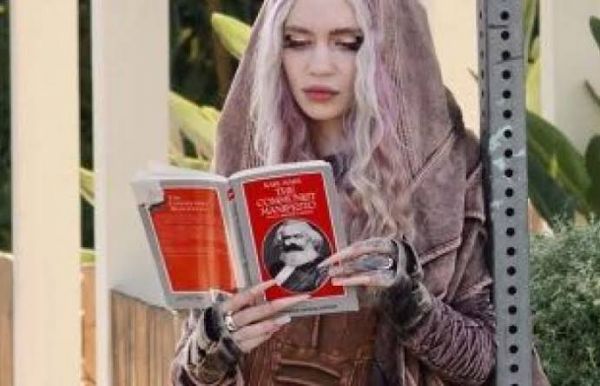 The Canadian musician Grimes tweeted an image of herself with the 1848 document last week – just after her reported split from the world’s richest man, Elon Musk. She isn’t the only one reading it right now

Remind me what it is again. A pamphlet first published by Karl Marx and FriedrichEngels in 1848.

I thought Marxism was dead … at least it seemed that way at the Labour party conference last week. Not so! It’s never been hotter!

Really? Yes! Even Grimes has been spotted reading a copy.

The Canadian musician? Real name Claire Boucher? The one who had a baby with Elon Musk? The very same. In her first public appearance since her reported split with Musk – the richest man in the world, CEO of Tesla and SpaceX – she was photographed wearinga fantasy-themed outfit on a street corner in that hotbed of communism, Los Angeles.

Is she a Marxist? No. The whole thing was staged; she tweeted that she had done the stunt to spark ridiculous headlines.

Even more ridiculous headlines than calling your child X Æ A-Xii? One assumes so, yes.

Is it a case of her hilariously trolling her definitely-not-a-communist ex?Perhaps, although she did write on Instagram: “I’m still living with E and I am not a communist (although there are some very smart ideas in this book …)”.

Remind me, what are those smart ideas? That human history was based on class struggles between the oppressors and the oppressed. And – to put it very simply – this was not good.

Sounds a lot like my life in 2021. Quite, which is why it is having a bit of a moment. It is still one of the most influential political documents ever written, and its ideas do have a habit of popping up in times of economic and social crisis.

Because it shows us how many of the problems in the world can be attributed to capitalist production, greed and property? Exactly. Check out the Pandora papers if you need more evidence. Or people hogging petrol.

What does it say is the answer to all this then? Revolution, of course. And the elimination of social classes as well as the means to appropriate private property.

Is this why young people keep saying: “Eat the rich”? Well, yes, huge numbers of young people are turning their backs on capitalism.

Well, that’s because they can’t afford to get a toe on the property ladder. Whatever the reason, the Communist Manifesto is strangely popular right now. Last year, it was translated into Somali for the first time and there’s even a site where you can teach your parrot to recite it.

Do say: “Workers of the world, unite. You have nothing to lose but your chains.”