They are called ‘landlords of Nigeria’. Here are the top politicians who have remained in public offices since 1999 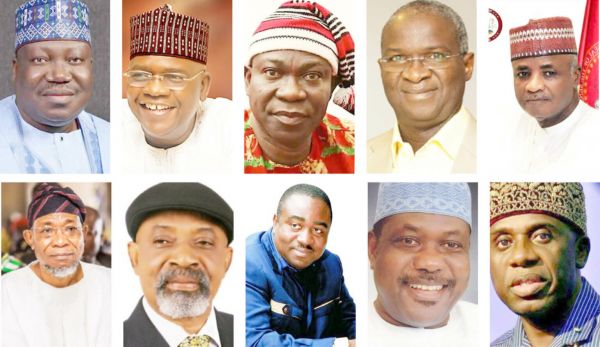 For 22 years, 22 top politicians have remained in government since the country returned to democracy in 1999, moving from one position to another – elective and appointive.

Because they have remained in circulation, manning government positions for over two decades, they are being regarded as ‘’landlords of Nigeria.” Some of them started as governors, local government chairmen, commissioners, ministers and members of the parliament. There are others who, after retiring from the civil service, military and paramilitary organisations, among others, crossed over to the political terrain.

Analysts and university dons are divided on their long stay in government. To some, their stay in government is good for the system as it has afforded them the opportunity to garner requisite experiences to contribute in sharpening and strengthening governance in the country. Others condemned the situation, identifying it as one of the banes of the bad governance bedevilling the country.

Over the years, huge amounts of resources have been expended on them and their families by the government at different times and levels. Some of them were part of the 16-year reign of Peoples Democratic Party (PDP) and now they are part of All Progressives Congress (APC), thanks to defection opportunities. There are others that were part of the defunct legacy parties of the ruling party.

Top on the list is Senate President Ahmad Lawan, who has been in the National Assembly since 1999 when the country returned to democratic rule after decades of military incursion.

Starting from being a member of the House of Representatives in 1999, Lawan is today the number one lawmaker and number three citizen of the country. So far, he has been at the federal parliament for 22 years.

For eight years, he was at the House of Representatives, where he represented the Bade/Jakusko federal constituency of Yobe State. From 2007 till date, Lawan has been representing Yobe North senatorial district. He was Senate Leader in the last Assembly and presently, the Senate President.

Influential in Gombe State politics, Goje has been in government like Lawan since 1999. But unlike Lawan, Goje started in 1999 as minister of state for power under former President Olusegun Obasanjo, before stepping up to become the governor of Gombe State in 2003. He was governor for eight years – 2003 to 2011.

On expiration of his tenure in 2011, Goje moved from the executive to the legislature as senator, representing Gombe Central. Recently, stakeholders from his senatorial district reportedly rejected his decision not to contest for an elective position in 2023. He is one of those said to be eying the national chairmanship position of the APC.

The foray of Senator Ike Ekweremadu (PDP, Enugu) into government positions started before 1999 when he was the chairman of Aninri Local Government in 1997.

Between 1999 and 2001, he was chief of staff to the then governor of Enugu State. He was later appointed secretary to the Enugu State Government in 2001 and served till 2002. In 2003, he crossed over to the Senate, and since then, he has been at the Upper Chamber.

Fashola was part of the administration of Bola Ahmed Tinubu in Lagos State from 1999 to 2007, where he served as chief of staff. On expiration of Tibunu’s tenure, Fashola was made the governor of the state, a position he manned for eight years.

As a key player in the formation of the APC, Fashola was made a super minister by President Muhammadu Buhari in 2015, manning three ministries – Works, Power and Housing. At the moment, Fashola is the Minister of Works and Housing.

Muhammad Adamu Aliero was the governor of Kebbi State from 1999 to 2007. In 2007, he moved to the Senate and left in 2008 when the late President Umar Musa Yar’adua appointed him the minister of the Federal Capital Territory (FCT). He currently represents the Kebbi Central senatorial district in the National Assembly.

When the country returned to civilian rule in 1999, he was deputy to former Governor Attahiru Bafarawa of Sokoto State. He succeeded Bafarawa in 2007 and reigned in the state for eight years. Wamakko, who was one of the governors that dumped the PDP to form the APC in 2015, is a second termer in the Senate.

Like Fashola, he was a commissioner under the Tinubu administration in Lagos State. From Lagos, he moved to his home state, Osun, where he governed for eight years – 2010 to 2018. In 2019, Buhari named him as minister of interior.

In 1999, he was an assistant national secretary and zonal secretary of the PDP in the South-East. Elected governor in 2003, Ngige was removed in controversial circumstances.  He represented Anmabra Central senatorial district between 2011 and 2015 in the Senate. In 2015, President Buhari named him as a minister. He was returned in 2019.

Amaechi was Speaker of the Rivers State House of Assembly for eight years – 1999 to 2007. It was after that that he governed the state for another eight years. In 2015, Amaechi, who was the director-general of the Buhari Campaign Organisation, was made a minister.

Kalu served as the governor of Abia State from 1999 to 2007. At the moment, he is in the Senate and one of the chieftains of the APC in the South-East said to be eying the presidency.

Abaribe became a deputy governor of Abia State after the 1999 election. In 2007, he was elected to the Senate on a PDP ticket. He is still in the Upper Chamber.

In 1999, he contested for a seat in the House of Representatives for the Katsina-Ala/Ukum/Logo federal constituency and was elected on the platform of the Peoples Democratic Party (PDP). Between 2007 and 2015, he was governor of Benue State At the moment, he is a senator.

Manager was elected to the Senate on the PDP ticket to represent Delta South in 2003. He has been representing the zone since then. Before going to the Senate, he was the chairman of the Delta State PDP from 1998 to 1999

Egwu was elected governor of Ebonyi State in 1999, after which he was appointed a minister on completion of his second term by the late President Umaru Yar’adua in 2008. At the moment, he is in the Senate.

Okorocha was a commissioner of the Federal Character Commission when democracy was restored in 1999. A two-term governor of Imo State, he is at the moment a senator and he is said to be nursing presidential ambition.

Regarded as the father of Nasarawa State, Abdullahi Adamu was the governor of the state from 1999 to 2007. He has been in the Senate since 2011. He is seen as one of core Buhari loyalists in the parliament.

In April 2003, Amosun was elected to the senatorial seat of Ogun Central. He was a two-term governor of Ogun State.

He rose to become a permanent secretary in the civil service before he was elected deputy governor of Yobe State in 2007. Geidam became governor in January 2009 when Mamman Ali died. He was governor until 2019. At the moment, he is in the Senate.

Ganduje was deputy to former Governor Rabiu Kwankwaso between 1999 and 2003. From 2003 to 2007, he served as the special adviser (political) to the then Minister of Defence, Kwankwaso. Between 2011 and 2015, he was deputy governor when Kwankwaso was reelected governor. Since 2015, he has been the governor of Kano State.

She was minister under former President Olusegun Obasanjo. She was deputy governor in Plateau State. At the moment, she is a minster in this administration.