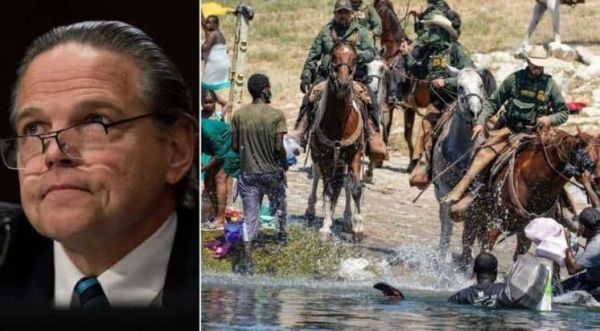 The US special envoy for Haiti has resigned in protest over the deportation of Haitian migrants.

The decision to return migrants fleeing an earthquake and political instability was "inhumane", senior diplomat Daniel Foote said in a damning letter.

Last weekend, the US started deportation flights from a Texas border town, where about 13,000 migrants had gathered under a bridge.

They have been waiting in a makeshift camp in temperatures of 37C (99F).

Local officials have struggled to provide them with food and adequate sanitation.

Since Sunday, the US has returned to Haiti 1,401 migrants from the Texas camp on the border with Mexico.

In his resignation letter, Foote said Haiti was a "collapsed state" that "simply cannot support the forced infusion of thousands of returned migrants lacking food, shelter, and money without additional, avoidable human tragedy".

White House spokeswoman Jen Psaki responded in a press conference: "Special Envoy Foote had ample opportunity to raise concerns about immigration during his tenure. He never once did so."

Ms Psaki also described images from the border - showing horse-mounted US officers corralling the migrants - as horrific and said horses would no longer be used in the area.

The widely shared pictures, taken by an AFP photographer earlier this week, have evoked grim comparisons to US slavery and the country's historical mistreatment of black people.

That led to pressure on President Joe Biden's administration, and prompted calls from within his Democratic Party to give the Haitians asylum rather than fly them back to their home country.

Many Haitians left after a devastating earthquake struck the country in 2010. A large number of those in the camp had been living in Brazil or other South American countries and travelled north after being unable to secure jobs or legal status.

This year has brought further hardship for the impoverished country. In July, President Jovenel Moïse was assassinated - and in August it suffered another deadly earthquake.

Foote said Haitians needed "immediate assistance", and criticised the US and other countries for interfering in the country's politics.

"What our Haitian friends really want, and need, is the opportunity to chart their own course, without international puppeteering and favoured candidates but with genuine support for that course," he said.

Foote has served in the role since Moïse's assassination in July.

A state department spokesperson thanked the ambassador for his work, and insisted that the US remained "committed to supporting safe, orderly, and humane migration throughout our region".

But in a later statement, a department spokesperson hit back at Mr Foote's claim he had been ignored by officials.

"It is unfortunate that, instead of participating in a solutions-oriented policy process, Special Envoy Foote has both resigned and mischaracterised the circumstances," Ned Price said.

President Biden has been accused of having an incoherent policy on migration. On the campaign trail, he vowed to reverse President Donald Trump's policies - which he deemed too harsh - and he put Vice-President Kamala Harris in charge of the issue in March.

But critics say they have failed to come up with a concrete plan for the near future, with the numbers of migrants coming into the country reaching record highs.

On the US side of the Mexican border in Del Rio, teams of police and National Guard agents have "completely blocked off" the area, according to immigrant rights activist Jenn Budd, who is at the scene.

"They're cleaning it up and getting rid of everything, and they have shut down access to the river itself."

On the Mexican side of the river, migrants in a camp in Ciudad Acuña are voicing concern about potential expulsions. "I have nothing in my country. What are they going to do?" one tearful Haitian woman asked an AFP reporter.

Separately, nearly 19,000 mostly Haitian migrants are in Colombia, waiting to cross the border with Panama on the journey to the US, officials say.

"We want them to let us cross, from here to Panama, before the United States closes its border," one migrant said. "They are going to take away our dreams. I come from Peru, I've been struggling."

As monthly border-crossings continue to surge, Joe Biden has been caught between conservatives who say he is weak on undocumented migrants and liberal activists who view his policies as too much like those of his predecessor, Donald Trump.

Now the criticism of Biden's actions are coming from inside his own administration - a development that could encourage more to speak out.

The images of uniformed border patrol agents on horseback accosting black Haitians have drawn comparisons to dark chapters of slavery and discrimination in American history. Immigration activists say the border episode provides evidence of the harsher treatment dark-skinned migrants receive in this country.

The US has a process by which it can give undocumented migrants "temporary protected status" from deportation if government officials determine that it would not be safe to return them to their home country.

Haitians, as well as citizens from a handful of Central American countries, enjoy this protection - and it's cited as one of the reasons migrants brave the hazardous journey to the US, even though new arrivals do not qualify for the protections.

Instead, the Haitians at the border are being sent back to a homeland where, according to Daniel Foote in his resignation letter, they face inhumane treatment and grave danger.