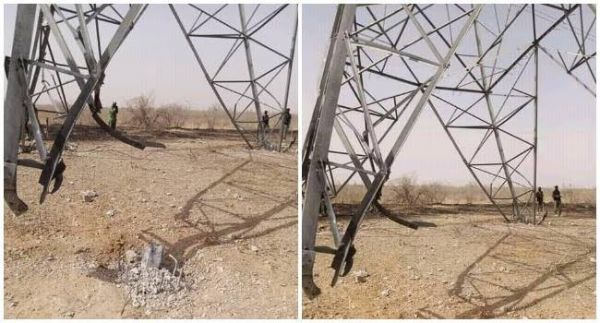 This latest setback came barely one month after NNPC commenced building of gas plant to provide electricity to the troubled state in the Northeast sub-region.

The electricity towers were destroyed at Garin Kuturu village, two kilometres from Auno, an area constantly being terrorised by the insurgents.

According to reports, the attack on the facilities started around 7 pm and lasted up to 10 pm after which four of the towers were completely grounded while the gift tower was hanging loosely.

Reacting to the incident, some residents of the state capital expressed frustration at the latest destruction, stating that the state had suffered enough hardship as a result of the insurgency.

“This latest destruction of electricity towers has confirmed that these insurgents are still active in the state and it also shows that they are very much closer to the city than expected,” one of the residents, Adamu Usman, noted.