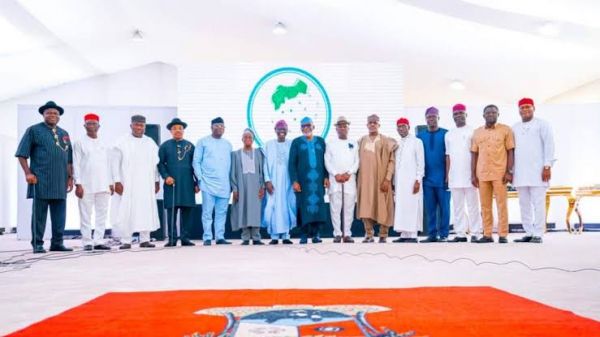 Governors of the southern states have expressed support for the collection of value-added tax (VAT) by state governments.

Rotimi Akeredolu, governor of Ondo state, disclosed this while reading a communique at the end of a meeting of the governors on Thursday in Enugu.

While the Lagos state government is seeking to join Rivers in the suit, the matter is currently pending at the Supreme Court.

Last week, the Court of Appeal directed states to maintain status quo on VAT collection pending the determination of an appeal filed by the Federal Inland Revenue Service (FIRS).

Akeredolu said that the governors resolved and affirmed that the collection of VAT fell within the powers of state governments.

“We resolved to support the position that the collection of VAT falls within the powers of the state,” Akeredolu said.

“The meeting reaffirmed its earlier commitments to fiscal federalism and emphasised the need to pursue its inclusion in the Nigerian Constitution through the ongoing constitutional amendment,” he said.

Akeredolu, who also doubles as chairman of southern governors’ forum, urged states in the south to leverage the competence of their houses of assembly and representation at the national assembly to pursue the goal.

He said that the meeting reviewed the state of the nation and the progress made in the implementation of the ban on open grazing of cattle in the south of Nigeria.

“The meeting expressed satisfaction with the rate at which states in the south of Nigeria are amending or enacting the anti-open grazing law,” he added.

“This aligns with the uniform template and aspiration of governors in the south and we encourage the states that have yet to enact the law to do so expeditiously.

“The meeting agreed to encourage the full operationalisation of the already agreed regional security which will share intelligence and collaborate toward the safety and security of the region.

Akeredolu said the governors were also satisfied with the handling of issues surrounding the Petroleum Industry Act (PIA) and ownership of the Nigeria National Petroleum Corporation by the larger Nigerian Governors Forum.

“The meeting reiterated its earlier position that the next president of Nigeria will come from the south of Nigeria in line with the politics of equity, justice and fairness,”Akeredolu said.