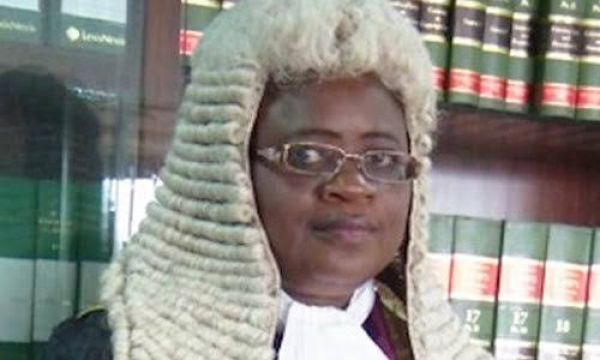 President of the Court of Appeal, Monica Dongban-Mensem, on Monday, appealed to the federal government for an upward review of the salaries of judges.

Dongban-Mensem, who spoke at the maiden edition of the Court of Appeal’s 2021/2022 new legal year ceremony in Abuja, revealed that salaries of judicial officers had stagnated since 2007.

She lamented that the CJN who heads the judiciary earns only N279,497 as monthly salary, while his colleagues on the Supreme Court bench go home with monthly pay of N206,425.

The Appeal Court President revealed that she receives N206,425, while other justices on the bench of the Court of Appeal go home with N166,285 monthly.

Drawing a comparison between African, Commonwealth countries and Nigeria, Mrs Dongban-Mensem said the salary structure for judicial officers and staff in Nigeria have consistently ranked poorly when compared to that of their counterparts.

She called on the federal and states governments to live up to their obligations under the implementation of financial autonomy of state legislature and the state judiciary order, 2020, known as Executive Order 10.

“I implore the government of the federation and states to urgently review the salaries and allowances of judicial officers and staff.

“The salaries of justices are static with no graduation as in the civil and public service. We have been on one salary grade for over 10 years now.

“May I also call on government to increase financial allocations that will enable us to introduce technical innovations that would improve adjudication,” she said.

On the performance of the Appeal Court under review, the president disclosed that a total of 5,392 appeals and 9,249 motions were filed in the 2020 divisions of the Court in the last legal year between September 2020 to August 2021.

Out of the cases, Dongban-Mensem revealed that 3,111 appeals were disposed along with 7,492 motions.

Meanwhile, the Body of Senior Advocates of Nigeria (BOSAN) ‘disagreed’ with Abubakar Malami, Attorney General of the Federation (AGF) and Minister of Justice, over the independence of the judicial arm of government, at Monday’s event.

Adegboyega Awomolo, representing BOSAN, reminded Malami of the constitutional principle of separation of powers generally believed to have suffered undue attacks under the Muhammadu Buhari administration.

The administration’s penchant for disregarding court orders and the removal of the immediate-past Chief Justice of Nigeria (CJN), Walter Onnogen, precipitated by a controversial ex parte order issued by the Code of Conduct Tribunal (CCT), speak to the trend of serial disregard for the principle of separation of power by the administration.

Malami, who spoke before Awomolo, had informed the gathering of President Buhari’s efforts to improve the condition of service of judges in the country.

Speaking later, Awomolo said, “I heard the Attorney General of the Federation say a committee of the presidency is looking at the condition of service, salaries and emoluments of judges.

“We need to be careful with that,” Awolowo warned.

He noted that it was time “the independence of the Judiciary and integrity of judges are not compromised anytime, anywhere and this circumstance”.

The senior lawyer admonished judges to be always courageous in dispensing justice.

Justice not for bargain - Malami

Malami also urged judges in the county to maintain the sanctity and credibility of the Court and not make justice a commodity for sale to the highest bidder.

He charged them to ensure that the sacred integrity reposed on the judges remain unshaken at all times in order to foster and promote public confidence in all rulings that emanate from this Court.

“Your resolve, as a temple of justice in ensuring that justice is not trivialised to a common bargain and is in effect accessible to all is highly commendable,” he said.

“I hereby also extend a call of solidarity, reverence and respect for the courts and court processes, to all our learned distinguished colleagues here present to ensure that justice is not trivialised to a commodity bargained for and taken by the highest bidder, at the detriment of the indigent who for want of equal bargaining power, wallow in the shadows of judicial neglect.”Guard your courts against invasion by perverts – NBA

Akpata, represented at the event by Yakubu Maikyau, a Senior Advocate of Nigeria, made reference to the unprofessional conducts of some lawyers which led to recent conflicting orders from courts of coordinate jurisdiction across the country.

“My Lords, will litigants desist from these ignoble conducts? It is respectfully most unlikely. It therefore behooves on Your Lordships to guard your respective doors against invasion by perverts,” Apata advised.

While pledging to support the judiciary in rooting out lawyers with questionable attitude, the NBA President said, “The journey to confront the bad eggs of the Bench will not be an easy task.

“This is because those who profit from the sale of justice will never go down alone. They will be willing, as always, to muster every tentacle and web of connections within and outside government and the corporate world to fight back,” he said.