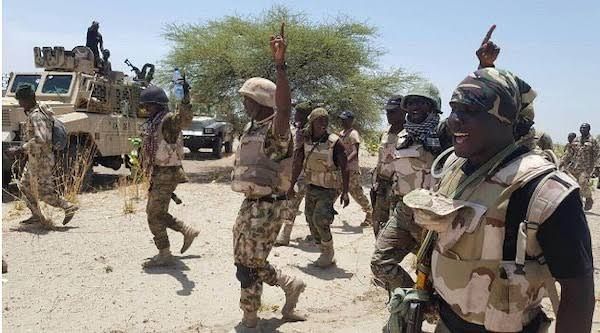 Armed bandits on Saturday attacked a military base in Zamfara State, leaving at least a dozen gallant security personnel dead.

Those familiar with the incident said that at least 12 personnel were confirmed dead while three were wounded in the attack on Forward Operating Base in Mutumji, Dansadau Local Government of Zamfara State.

The sad incident comes amidst heightened offensive by security forces against bandits in the Northwest region of Nigeria.

Scores of bandits were reportedly killed and many arrested in several operations which necessitated the shutdown of telephone networks in Zamfara and parts of Katsina States.

The latest attack on the military base, according to sources, left a casualty of nine Air Force, two police and one Nigerian Army personnel.

The bandits also carted away weapons and other equipment from the slain security personnel while also setting ablaze other parts of the base.

Defence spokesperson, Benjamin Sawyerr, a major general, was not available for comments on the incident Sunday night.

However, a source at Defence Headquarters said, “Operation are ongoing in that area and there is total shut down of GSM communications.

“Our troops are consolidating on successes recorded so far. Information on ongoing operations will be premature at this stage.

“Let us all join voices in ensuring out troops once and for all deal with the menace of insecurity in the NW and NC. They need not be distracted for now.”

The bandits had few weeks ago downed an Airforce alpha jet aircraft.

The aircraft which was being used to attack locations of the criminals came under intense enemy fire by the bandits which brought it down.

The Nigerian Air Force, however, said there was no casualty as the pilot escaped unhurt.

That incident made it at least four air crashes involving Nigerian military planes in the last seven months.

Meanwhile, Governor Bello Matawalle of Zamfara State has ruled out negotiation with the bandits, saying they would ultimately be crushed.