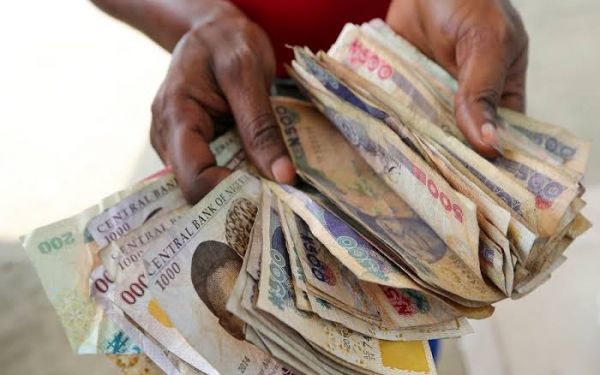 The Naira was at a record low against the dollar on Thursday, depreciating to nearly N550 at the unofficial market from N530 at last week’s close as demand for the greenback from importers continues to bump up against scarce market liquidity.

Checks in Kano revealed the record high forex rate especially at the Kano’s popular Wapa BDC market in Wapa, where forex traders said as of Thursday evening, a dollar was exchanging for N549, and that it could even exceed N550 before the close of the day.

Aminu Shua’ibu Malan, a trader in the market, said: “Prior to the last three days, it used to be around N520, but has now reached N550.

“This is caused by the high demand by importers and its scarcity courtesy of this Central Bank of Nigeria (CBN) policy. We are afraid that if this policy continues, a dollar could reach about N600-N700, which will surely spell doom for our economy.”

The traders, who said that there is no hope in sight as to when the Naira will appreciate, called on the apex bank to have a rethink on its dollar ban policy in order to save the country’s economy.

In Abuja, the Naira continued a free fall, sheding off about N12. At the Wuse Zone 4 BDC market, most of the forex traders sold the naira for between N540 and N542 to the dollar, as against about N528/$1 last week.

A BDC operator named Sumaila said he sold for N540/$1. He also said the price has spiked because even the banks don’t sell to BDCs, yet most SMEs get their forex funding needs from BDCs’ supplies.

Some other BDC operators said they sold the dollar for between N540 and N542.

Ibrahim Audu, a forex hosteller who prospects for customers at Wuse Zone 4 Abuja, told our Correspondent he could arrange for N542/$1 if the Correspondent would sell up to $10,000.

At the Murtala Muhammed International Airport (MMIA) Lagos showed that dollars exchanged for between N530 to N535 at the parallel market.

“We started at N525 this week and it has continued to rise because of high demand,” says a Bureau De Change operator.

“We don’t even understand it again. They said banks should give dollars and when you go there, they would tell you there is no dollar. The banks too have become Bureau De Change,” another BDC operator, who identified himself simply as Hassan, said.

“We now sell at N529, N530. We hope very soon, things will change and CBN will reconsider their stand,” he added.

Baba gave the warning on Thursday during an interactive session with managing directors of banks at the Lagos Zonal Command of the commission.

According to a statement by the EFCC spokesman, Wilson Uwujiaren, the anti-graft agency boss charged the bankers to comply with the guidelines of CBN on the issuance of Personal Travel Allowance, PTA, and Business Travel Allowance, BTA, to their customers.

“You need to ensure full compliance with regard to knowing your customers and ensuring that you do not give opportunities for foreign exchange malpractices,” he said.

Pointing out the salient issues EFCC will tackle, Bawa said, “Some of the issues we have identified include foreign exchange malpractices and fraudulent election financing.”

He said while the CBN had directed commercial banks to sell dollars, the banks only supply to “cabals.”

“And once the demand is higher and supply is lower, definitely, the money is going to be high. The solution now is for the CBN to call us back. Once they call us back, the money would come down.”

Trading Desk Manager at AZA Murega Mungai said: “Despite the current weakness, the central bank on Tuesday said it still expects the country’s unofficial and official rates to converge.”

The Naira was trading at 411.30 to the dollar on the Nigerian Autonomous Foreign Exchange Rate Fixing (NAFEX) window this week. We expect the currency pressure to persist in the coming days as demand for forex continues to outweigh supply.