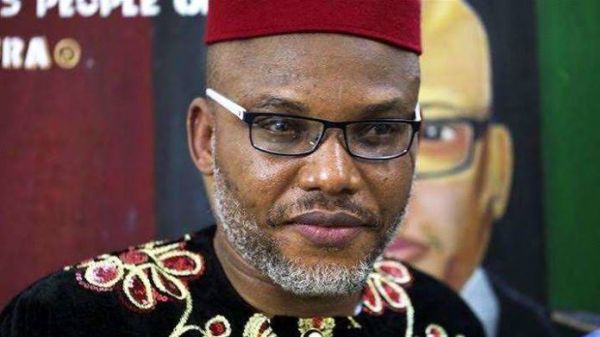 Nnamdi Kanu has filed a lawsuit alleging that he was illegally transferred from Kenya to Nigeria and demanding he be freed and allowed to go to Britain, according to media reports citing legal documents.

Kanu, who holds British citizenship, leads the Indigenous People of Biafra (IPOB) group which campaigns for secession in Southeastern Nigeria. Federal government has labelled the group a terrorist organisation.

Kanu disappeared from Nigeria whilst on bail in 2017 after spending two years in jail. He was re-arrested in June this year and is in Abuja facing trial for treason and other charges.

In a lawsuit against the federal government and security services, filed in a court in Southeastern Abia State, Kanu’s lawyers alleged a series of violations of his fundamental rights, according to reports from several Nigerian media outlets.

It said Kanu should be “repatriated” to Britain and that if Nigeria wanted to detain him it should make an extradition request to the British authorities.

The Abia court confirmed a suit had been filed and a hearing was scheduled for Sept. 21.

In an email, a UK government spokesman said it was working to secure consular access to a British national detained in Nigeria.

“We are in regular contact with the Nigerian authorities and remain in contact with his family and legal representatives,” the email said.

Federal government has not revealed the circumstances of his detention. Kenya has denied involvement.

Kanu’s detention has roiled the Southeast regional homeland of the Igbo ethnic group, which tried to secede in 1967 as the Republic of Biafra, triggering a three-year civil war in which more than a million people died.

IPOB has repeatedly called on people across the Southeast to stay at home in protest over Kanu’s situation. It scheduled another stay-at-home day for Thursday to protest against a planned visit to the region by President Muhammadu Buhari.

Amnesty International said in August that Nigerian security forces had killed at least 115 people and arbitrarily arrested or tortured scores of others as part of their crackdown on IPOB. Federal government did not comment on the allegations.