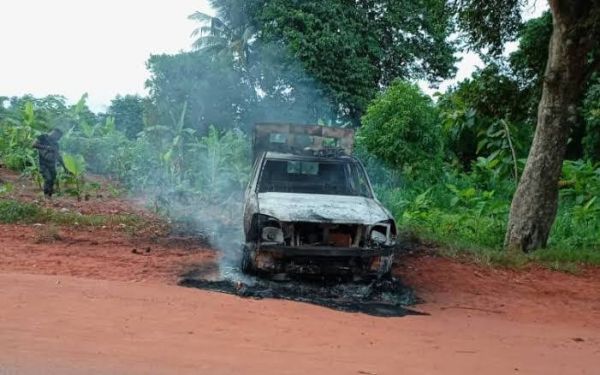 Three officers of the Delta State Police Command have been shot dead, with their corpses set on fire.

The officers attached to Umutu Divisional Police Headquarters, were killed at a checkpoint along the Obeti/Oliogo Road in Ukwuani Local Government Area of the state.

Our correspondent gathered the hoodlums ambushed the deceased officers and burnt them inside their Toyota Sienna patrol van.

“They were burnt beyond recognition in their patrol van”, an eyewitness said.

The State Police Public Relations Officer (PPRO), Bright Edafe, confirmed the killings but did not give details.

He told journalists in Asaba, the state capital, that Prince Eric Takerere and the two mobile police men were murdered and their rifles carted away; adding that they also attempted to murder his brother, Franklyn Takerere.

Edafe hinted that since their murder, the Police had not relented in their effort to arrest the fleeing members of the gang, hence the earlier arrest of

According to him, they were arrested on July 09, 2021, and thereafter, they led police operatives to their hideout in Udu, Warri and Aladja, area where six members of the gang were arrested.

“They all confessed to be involved in the murder of prince Eric Takerere, his two mobile police men,” he said.

“They also led the operatives to their armoury where two AK47 rifles, one pump action gun, one locally made pistol, four magazines, 76 rounds of live ammunition and 38 rounds of live cartridges were recovered”, the PPRO stated.