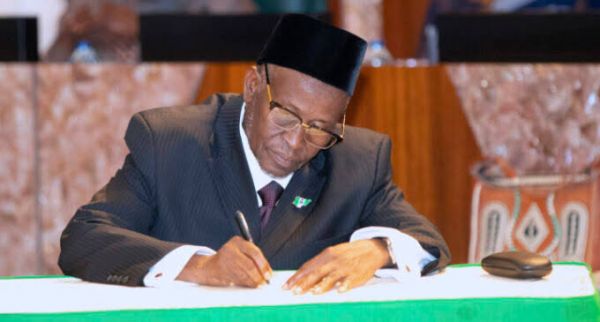 He gave the warning at a marathon meeting he held with six chief judges in Abuja on Monday.

It would be recalled that Muhammad invited the judges over conflicting ex parte orders.

In a statement, spokesperson of NJC, Soji Oye, said the meeting which commenced at 11am lasted till 5:30pm.

He said Chief Judge of the High Court of the Federal Capital Territory was also in attendance.

The spokesperson reported further that the CJN first had a one-on-one interaction with the Chief Judges of the FCT, Abuja, and then the CJs of Rivers, Kebbi, Cross River, Jigawa, Anambra, and Imo.

“Each of the CJs present was separately quizzed personally by the CJN for over an hour before he later read the riot act in a joint session with all of them,” the statement said.

“A damage to one jurisdiction is a damage to all. We must, therefore, put an end to indiscriminate granting of ex parte orders, conflicting judgements or rulings occasioned by forum-shopping.

“Your job as Heads of Court is a sacred one, and it, therefore, includes you vicariously taking the sins of others. There must be an end to this nonsense.

“You shall henceforth take absolute charge in assigning cases or matters, especially political personally. We shall make an example with three judges and never shall we condone such act.”

Three judges who granted conflicting ex parte orders have been invited to appear before the NJC.

Their identities were not revealed but Oye said they have been asked to show cause why disciplinary action should not be taken against them.