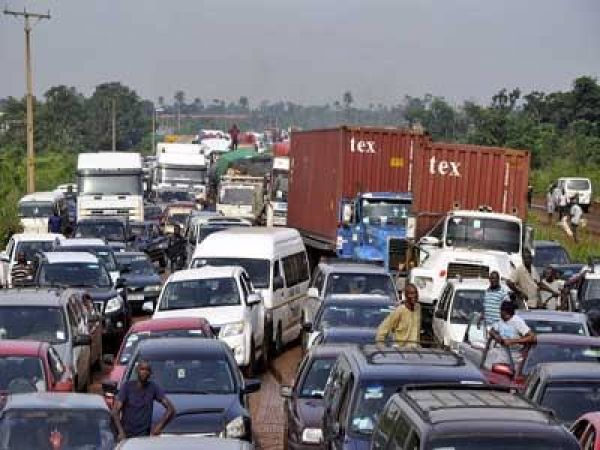 Scores of travellers on Lagos-Abeokuta Expressway on Monday were stranded after residents in the Ado-Odo/Ota Local Government Area of Ogun State staged a protest over bad roads in Ota and its environs.

The residents, who came from Sango, Ota, Ijoko, Oju-Ore, Joju and their environs, blocked the highway for several hours in protest against the deplorable condition of roads in the area.

Many commuters and motorists were trapped for hours on the road.

Recall that some youths in October 2020 protested against the condition of roads in the community with the hashtag, FixOtaRoads.

Almost one year after, residents lamented that roads in the area had continued to deteriorate, adding that the government paid no attention to them.

The state Governor, Dapo Abiodun, recently faulted the Federal Government for not ceding the roads to him and Governor Babajide Sanwo-Olu of Lagos State.

Last Thursday, Abiodun said some engineers from the Federal Ministry of Works were on the road for assessment, expressing confidence that renovations would commence soon.

Residents, who seemed to have run out of patience on Monday, called for urgent intervention.

Armed with placards with various inscriptions such as, ‘Fashola, stop looking away’, ‘Shey na road be this?’, ‘Don’t allow Gov Abiodun to kill the goose that lays the golden eggs’, ‘Fix Ota roads’ and others, the protesters expressed anger, saying the town had been neglected.

They accused President Muhammadu Buhari; Abiodun; Minister of Works and Housing, Babatunde Fashola; the Senator representing Ogun West, Tolu Odebiyi; and his counterpart at the House of Representatives, Jimoh Ojugbele, of neglect, saying their actions led to the destruction of the roads.

A spokesperson for the protesters, Sola Afariogun, said the group was made up of people living in Ota, both indigenes and non-indigenes.

He said, “We have lost lives and we are losing work hours on a daily basis. The cost of car repair is much; transport fare is also on the rise; it has also increased the cost of goods as market women now add the cost of transporting goods to the cost of selling.