Obaseki was right; CBN has so far ‘printed’ N14.86trn to fund Buhari’s budgets. Here are the details 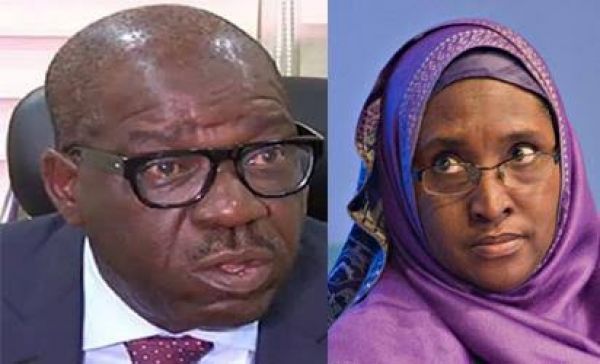 Federal Government’s total borrowing from the Central Bank of Nigeria through Ways and Means Advances has ballooned to N15.51tn, rising by 2,286 per cent in six years, data collated from the CBN have shown.

The N15.51tn owed by the Federal Government to the central bank is not part of the country’s total public debt stock, which was N33.11tn as of March 2021, according to Debt Management Office.

The public debt stock comprises the debts of the Federal Government of Nigeria, the 36 state governments and the Federal Capital Territory.

Ways and Means Advances is a loan facility used by the central bank to finance the government in periods of temporary budget shortfalls subject to limits imposed by law.

According to Section 38 of the CBN Act (2007) the bank may grant temporary advances to the Federal Government in respect of temporary deficiency of budget revenue at such rate of interest as the bank may determine.

The Act says, “The total amount of such advances outstanding shall not at any time exceed five per cent of the previous year’s actual revenue of the Federal Government.

“All advances shall be repaid as soon as possible and shall, in any event, be repayable by the end of the Federal Government financial year in which they are granted and if such advances remain unpaid at the end of the year, the power of the bank to grant such further advances in any subsequent year shall not be exercisable, unless the outstanding advances have been repaid.”

In the first six months of this year, the Federal Government borrowed N2.4tn from the CBN, more than half of what it got in the whole of last year.

The N2.4tn is also much higher than five per cent of the Federal Government’s retained revenue of N3.9tn in the previous year.

As of June 2015, a month after President Muhammadu Buhari came into power, the total government borrowing from the apex bank was N648.26bn.

Last year, the government turned to the apex bank for a record N4.9tn to plug its fiscal financing gap, bringing its total borrowing to N13.11tn as of December 2020.

A global credit ratings agency, Fitch Ratings, had in January raised concerns over the Federal Government’s repeated recourse to its ways and means facility with the central bank.

According to the agency, the use of central bank financing in Nigeria, which predates the Covid-19 pandemic shock, could raise risks to macro-stability in the context of weak institutional safeguards that preserve the credibility of policymaking and the ability of the central bank to control inflation.

“CBN’s guidelines limit the amount available to the government under its WMF to five per cent of the previous year’s fiscal revenues. However, the FGN’s new borrowing from the CBN has repeatedly exceeded that limit in recent years, and reached around 80 per cent of the FGN’s 2019 revenues in 2020,” it said.

In February, the International Monetary Fund said Nigeria’s monetary policy operational framework should be reformed in the medium term, adding that the central bank financing of budget deficit should be phased out in order to reduce inflation.

“The increasing reliance on CBN overdrafts has come with negative consequences. The financing is costly for the Federal Government at interest rates of MPR plus 300 basis points, and for the CBN, with sterilisation done through issuance of OMO bills,” it said.

The IMF added that a complete removal of central bank financing of fiscal deficits would require higher domestic revenue mobilisation.

The Washington-based fund had on April 28, 2020 approved Nigeria’s request for emergency financial assistance of $3.4bn to support the country’s efforts in addressing the severe economic impact of the Covid-19 shock and the sharp fall in oil prices.

In a letter of intent to the IMF, the Minister of Finance, Budget and National Planning, Zainab Ahmed, and the CBN Governor, Godwin Emefiele, said the recourse to central bank financing would be eliminated by 2025.

They added that the existing stock of overdrafts held at the CBN would also be securitised.

The Managing Director and Chief Executive Officer, Financial Derivatives Company Limited, Bismarck Rewane, described N15.51tn as ‘quite large’, stressing the need for the government to securitise it.

He said, “N15tn is about 45 per cent of total money supply. So, if, for example, those ways and means advances were securitised today, people will have to invest in government securities and it will reduce money supply by 45-50 per cent.

“What we need to do is to actually securitised this formally. But I think that right now, the Federal Ministry of Finance or DMO is paying interest on the ways and means advances. So, the effect is that there is a cost to the borrowing, and the central bank is receiving the interest on it.”

According to Rewane, the central bank can easily sell the instruments under the open market operations.

He said, “The quantum is quite large but to the extent that interest is being charged on it, it may not be as destabilising as the number may make it appear.

“Two, the amount that has been taken out of liquidity with CRR (cash reserve ratio) compensates mainly for the extra liquidity that is created by these ways and means advances.”

A former member of the CBN Monetary Policy Committee, Akpan Ekpo, said the government should minimise its usage of central bank financing, adding, “I hope they are borrowing to finance capital projects, not for recurrent expenditure.”

“The ideal thing is to avoid the ways and means facility, and most countries avoid that,” he said.

According to the former Director-General, West African Institute for Financial and Economic Management, government’s dependence on the WMF creates inflation, crowds out private investment and limits the way the CBN can carry out monetary policy.

He said, “Assuming that they are printing money to do this, then it will be too much money chasing few goods, which will be inflationary. That is why it is good to minimise it; the jump is quite much.

“There is a need for transparency. If they are doing all of this, and they are also borrowing externally, they need to be transparent – telling us what the monies are being used for.

“They are also borrowing a lot from IDA (World Bank), ADB, etc; they are issuing Eurobonds and Sukuk bonds. When it is becoming too many, there is a problem. I hope it is well managed, otherwise it is not good for the economy.”

Governor of Edo State, Godwin Obaseki, had said in April that the Federal Government printed N60bn to augment what the three tiers of government shared in March. The claim was faulted by the CBN governor and the finance minister.

The MD/CEO, Cowry Asset Management Limited, Johnson Chukwu, said the central bank borrowing was putting pressure on the exchange rate and the inflation rate, with ‘liquidity that has no productivity attached to it coming into the system’.

He said, “What that means is that the central bank has been struggling with mopping up excess liquidity as a result of injection of liquidity not coming from productive activities but rather from Federal Government’s W&M borrowing.

“In the first five months of this year, total Federal Government revenue was N1.8tn, while expenditure was N4.8tn, leaving a gap of about N3tn, which is the reason why you saw that over N2tn borrowed from the central bank.”

According to Chukwu, the securitisation of the ways and means advances will further increase the interest obligations of the Federal Government.

Bloomberg reported on February 16, 2021 that the Federal Government had set the terms for the conversion of its stock of central bank overdrafts into long-term notes in a bid to create transparency around its dependence on that source of funding.

DMO Director-General, Patience Oniha, was quoted as saying that the N10tn debt would be exchanged for 30-year notes issued to the central bank, adding that the agreement on timing for the conversion needed to be finalised to get the required approval from the cabinet, at the earliest in the second quarter.

In June, London-based Capital Economics, in a report titled ‘The perils of deficit monetisation in Nigeria’, noted that over the past six years, on average around 55 per cent of annual budget shortfalls had been financed by the CBN.

“Many of the problems plaguing Nigeria’s economy – from high inflation to a persistently overvalued currency – are tied to the government’s sustained reliance on the central bank to cover fiscal financing gaps,” it said.