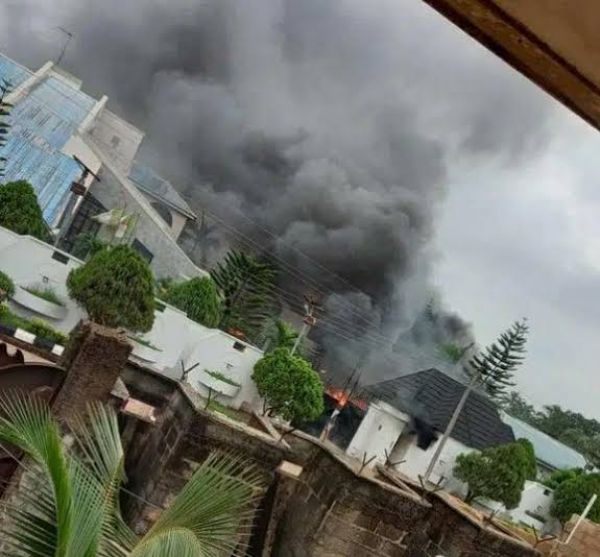 Security agents operating in no fewer than 15 vehicles, including an Armoured Personnel Carrier, burnt down a hotel, a residential house and about 15 shops in Orlu, Imo State, on Sunday.

The incidents happened at Okporo and Obor communities carved out of Umutanze in the Orlu Local Government Area of the state.

Community sources told our correspondent that the security agents, who came for the operation, supervised the burning of the hotel before they left.

Our correspondent gathered that the Ezeacho Hotel is owned by a businessman, Chinonso Uba.

The hotel is located on the Okporo Mgbidi Road behind St Damian’s Hospital mortuary, Okporo.

Two persons were said to have lost their lives during the operation, while some guests were also arrested.

The hotelier’s country home in the Obor community was also burnt.

While the reason for the burning of the hotel, house and shops had not been ascertained as of press time, our correspondent gathered that the hotelier’s mother, Dorathy Uba, is a popular politician in the local government area.

A source in the area told our correspondent that the hotelier lived with his family in the hotel.

Our correspondent could not ascertain if the hotelier was among the persons arrested by the security agents.

A source, who witnessed the operation, said, “The hotel is on the Okporo-Mgbidi Road behind St Damian Hospital mortuary, Okporo. The owner of the hotel is Chinonso Uba. I know him very well. He lives with his family in the hotel. The hotel is a storey building.

“He (Chinonso) is from the Obor community. Obor was created from Umutanze. Two persons were killed in the hotel during the operation. Chinonso lives with family in the hotel. His mother is a popular politician in the area. Her name is Dorathy Uba. The security agents cordoned off the area and made sure that the hotel was completely burnt.

“The stern looking security agents also went to the hotelier’s village house at Obor community and set it ablaze. They also burnt no fewer than 15 shops, where caskets were being sold opposite the hospital.”

When contacted, the police spokesperson in the state, Michael Abattam, said he would get a feedback and revert to our correspondent, but he had yet to do so as of the time of filing this report.