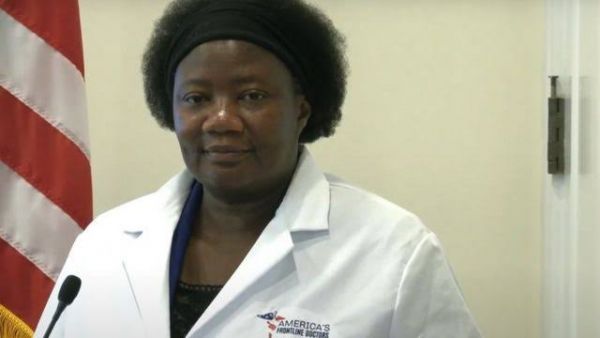 The Texas doctor who became famous in 2020 for promoting the use of Hydroxychloroquine [HQC], an anti-malarial drug, as "a cure" for Covid-19 has filed a defamation lawsuit against CNN and CNN anchor, Anderson Cooper in the amount of $100 million.

Stella Immanuel filed a federal lawsuit on Tuesday claiming that, "in an effort to vilify, demonize and embarrass President [Donald] Trump, Cooper and CNN published a series of statements of fact about Immanuel that injured her reputation and exposed her to public hatred, contempt, ridicule, and financial injury."

In the suit, Immanuel says Cooper and CNN "effectively caused the deaths of hundreds of thousands whose lives would have been spared if they had been treated early with HCQ."

In July 2020, then-President Trump tweeted a video of Immanuel speaking on the steps of the Supreme Court building, where she claimed "You don't need masks, there is a cure...You don't need people to be locked down."

In the same filmed event, which Immanuel chronicles in the suit, she said, "All you fake doctors out there that tell me, 'Yeah. I want a double blinded study.' I just tell you, quit sounding like a computer, double blinded, double blinded. I don't know whether your chips are malfunctioning, but I'm a real doctor...we have neurosurgeons, like Sanjay Gupta saying, 'Yeah, it doesn't work and it causes heart disease.' Let me ask you Sanjay Gupta. Hear me. Have you ever seen a Covid patient?"

A double-blind study is widely considered in the medical community as the gold standard in proving the efficacy of a treatment. It is one of the only ways to remove physician and patient bias from the testing process, as neither knows if the patient is receiving the real treatment or a placebo.

Cooper went on the air saying "Trump promoted a doctor who believes that women can be physically impregnated by witches in their dreams" and who "has, among other things, claimed that sex with 'tormenting spirits' is responsible for gynecological problems, miscarriages and impotence." He pointed to YouTube videos where Immanuel made these claims.

Facebook eventually took down the video because it was "sharing false information about cures and treatments for Covid-19," according to Andy Stone, a spokesman for the platform.

Immanuel continues to claim HQC is "entirely effective" in the suit, and asks for $100 million for "compensatory damages and punitive damages," in addition to court costs and interest.

While the Federal Food and Drug Administration had issued an emergency use authorization for HQC in Covid-19 treatment for a short time, that approval was revoked in June 2020 when the drug was deemed "unlikely to be effective" and to be a potential cause of "serious cardiac adverse events and other potential serious side effects."