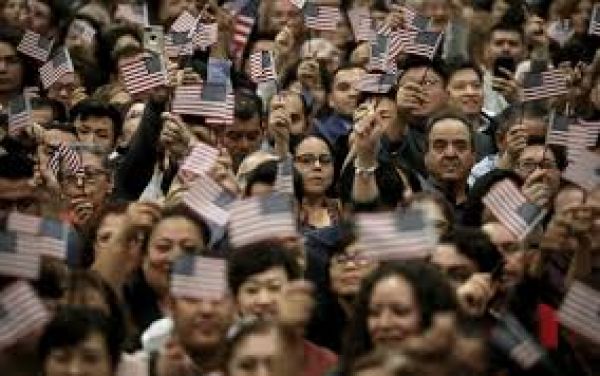 While Biden will own this unwelcome distinction, former president Donald Trump staged this disaster last year by barring most immigrants sponsored by their family members from entering the United States. This caused 120,000 family green card slots to go unused.

Green cards permit holders to permanently live and work in the United States, and immigration law provides two primary routes to obtain them — sponsorship by family members or by employers. If fewer family-based green cards are issued than are allotted, the law requires that the unused family-based number from one year be added to the cap for employment-based green cards in the following year — in this case, an additional 120,000 slots (on top of the annual 140,000).

But here’s the problem: If those additional employment-based slots aren’t used by Sept. 30, the end of the fiscal year, they are lost forever. And the administration is now saying that most won’t be, largely because of bureaucracy and a lack of preparation by the federal government.

The Trump administration should have known a huge effort would be needed to adjudicate the additional 120,000 employment-based applications. And it had plenty of time to mount a response: Trump signed his executive order banning most family-based immigrants in April 2020. But no plan ever materialized.

Instead, the State Department refused to allow anyone to submit applications until the first day of the new fiscal year in October 2020 — half a year wasted. That meant the government had just 12 months to process applications that often take much longer in a normal year. What happened next is a window into the United States’ devastatingly broken immigration system.

The delay resulted in a mass filing scramble in October. Because the United States is probably the only government in the world that has failed to produce an online immigration filing system, these paper forms had to be sent by mail. The government’s mailroom staff had to manually enter each applicant’s information into its system and issue a receipt. Precious weeks disappeared as too few staff attempted to rip open the flood of envelopes.

The next stage was no better. Government regulations require that every applicant be fingerprinted for backgrounds checks. This rule may seem reasonable — except nearly all employment-based applicants have lived and worked legally in the United States, many for a decade or more, with temporary residency status. This status they maintained by — you guessed it — repeatedly being fingerprinted and passing background checks.

What’s worse is that all these green card applicants were booking multiple appointments for fingerprinting, one to continue their underlying temporary status and another for the green card. Mercifully, Biden stopped requiring double booking, but he waited until mid-May to do so — way too late to stop the disaster.

At the same time, most green card applicants must request permission to travel internationally and work without the restrictions of their temporary work status while the green card application is pending — benefits they could obtain with a green card. In other words, the government is reviewing applications that are only necessary because it is taking so long to review a different application.

The lost green cards will disproportionately harm Indian immigrants. That’s because while they make up about half of all applicants, federal law says immigrants from a single country usually cannot make up more than 7 percent of green cards in a year (the remnants of a racist system going back to the 1920s). As a result, many Indian immigrants face a lifetime wait, while others pass them in line.

Yet the extra green cards have given Indian applicants a once-in-a-lifetime chance to farexceed that 7 percent threshold this year because there are not enough other applicants to use them. But that chance will be lost for thousands waiting in the queue if the government fails to get the cards out the door before Oct. 1.

The Biden administration can change course, but at this stage, it would need to take extreme action to work through the backlog — such as issuing approvals en masse without any reviews but revoking later if an issue pops up.

But by saying that it expects 100,000 green cards to go to waste, the administration is implying it would rather take the extreme step of violating the law that requires them to be issued. Unless there is a change of heart soon, Biden will assume responsibility for denying thousands of immigrants the path to citizenship that Congress promised them.