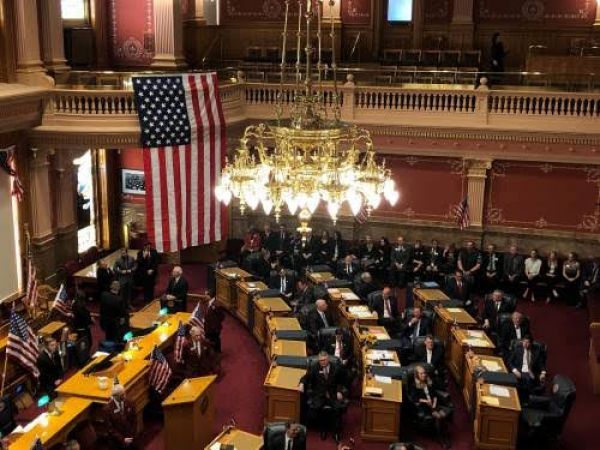 Some United States lawmakers have stopped a proposed sale of $875 million worth of arms to Nigeria over concerns about the Nigerian government’s human rights record.

According to Foreign Policy, top Democrat and Republican on the Senate foreign relations committee have delayed clearing a proposed sale of 12 AH-1 Cobra attack helicopters and accompanying defence systems to the Nigerian military — the development is coming at a time when the nation is grappling with several security challenges.

The report noted that behind-the-scenes controversy over the proposed arms sale illustrates a broader debate among Washington policymakers over how to balance national security with human rights objectives.

It said the development shows how powerful US lawmakers want to push Joe Biden’s administration to rethink the US relations with Nigeria amid growing concerns that President Muhammadu Buhari is snowballing into “authoritarianism” as the country is battling multiple security challenges, including jihadist insurgency.

According to the report, despite the battle against Boko Haram insurgents, western governments and international human rights organisations are being critical of the Buhari-led administration over the Twitter ban, systemic corruption issues, and the invasion of Lekki tollgate by soldiers during the #EndSARS protest in October 2020.

In June, Bob Menendez, a senator, and chairperson of the senate foreign relations committee, during a senate hearing with Anthony Blinken, US secretary of state, called for a “fundamental rethink of the framework of our overall engagement” with Nigeria.

Multiple US officials and congressional aides who spoke with Foreign Policy said Menendez and Jim Risch, a Republican senator on the senate foreign relations committee have placed a hold on the proposed arms sale.

Officials familiar with the matter said the details on the proposed sale were first sent by the US State Department to Congress in January before Biden was inaugurated as president.

“Some experts said the United States should hit the pause button on major defense sales until it makes a broader assessment of the extent to which corruption and mismanagement hobble the Nigerian military and whether the military is doing enough to minimize civilian casualties in its campaign against Boko Haram and other violent insurrectionists,’’ the report said.

“There doesn’t have to be a reason why we don’t provide weapons or equipment to the Nigerian military,” said Judd Devermont, director of the Africa program at the Center for Strategic and International Studies, a think tank.

“But it has to be done with an assessment of how it will actually, one, change the direction of conflict in Nigeria, and, two, that they will use it consistent with our laws. In both cases, it’s either a question mark or a fail.”

“There is a culture of impunity that exists around abuses by the military,” said Anietie Ewang, the Nigeria researcher at Human Rights Watch.

Ewang cited the Nigerian military’s killing of unarmed protesters during the country’s massive #EndSARS demonstrations against police corruption and brutality last year as well as cases documented by human rights organizations of abuses in the military’s campaign against Boko Haram.

On June 22, the Nigerian air force took delivery of the first batch of six A-29 Super Tucano aircraft from the US, while the second batch of six is expected in the country in September.