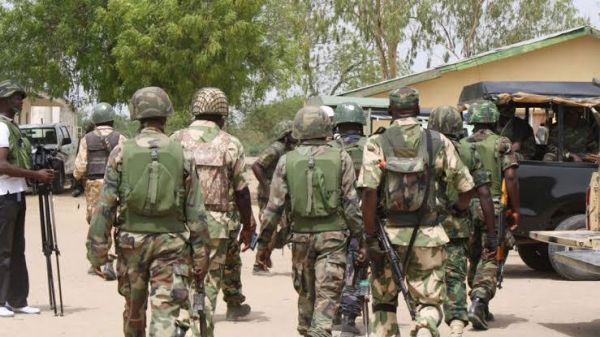 Two soldiers, a corporal and a private soldiers, were kidnapped Saturday evening by Boko Haram terrorists.

The incident, according to security sources, happened around Jakana, where the insurgents operate on a daily basis.

The two soldiers, according to the source, were travelling in a commercial vehicle after obtaining pass to do so.

Another security source informed the driver of the vehicle has been arrested by soldiers of 29 Task Force after other passengers suspected foul play from him.

“Yes, I can confirm that two of our guys were kidnapped by Boko Haram Saturday evening, one corporal and a private soldiers. They were traveling on pass when the incident happened before Jakana after Mainok on Maiduguri road,” the source informed.

The source also regretted how abduction of people Maiduguri/Damaturu road has become a daily occurrence.

“This road is now becoming dangerous every passing day. There is no day that these bad boys will not come out and kidnap people,” the source added.