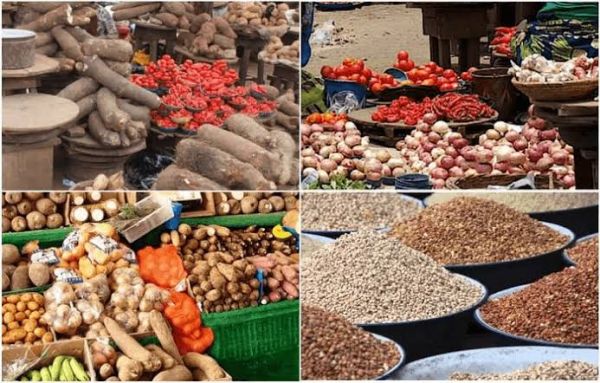 Prices of major legumes and cereals in Nigeria rose at an average of about 98.85 and 99.9 per cents respectively in the last one year, a PREMIUM TIMES market survey has shown.

Likewise, the survey showed that prices of essential cowpeas such as beans and soybeans increased by 159.3 and 76.7 per cent, while prices of groundnuts rose by 63.64 per cent from what they were being sold for last year.

Nigeria’s food inflation reached 27 per cent in February 2021, according to National Bureau of Statistics, making it the highest since at least 2005.

The aftermath of the rise has been evident in the prices of all classes of food, as prices continue to skyrocket almost on a daily basis, leaving Nigeria’s large population of poor citizens struggling to get food and key ingredients for survival.

National Bureau of Statistics (NBS) latest Consumer Price Index report, which measures prices of goods and services, said Nigeria’s inflation rate fell for the second consecutive month in May to 17.93 per cent from 18.12 per cent recorded a month earlier.

NBS in its report noted that the rise in the food index as of May this year was caused by increases in the prices of bread, cereals, milk, cheese, eggs, fish, soft drinks, coffee, tea and cocoa, fruits, meat, oils and fats, and vegetables.

While inflationary pressures subsist, efforts to spur local food production by the Buhari-led administration in the bid to cut down on importation bills, and as well achieve food sufficiency have been majorly truncated by attacks on farms and farmers, forex scarcity, naira devaluation, and extreme climatic events, Covid-19 disruption, and challenges with importation due to border closure policy that lasted almost a year, causing food prices to steadily rise.

A PREMIUM TIMES market survey shows that the prices of common cereals and legume crops, such as rice, beans, maize, soybeans, groundnut among others which are the main staple foods among Nigerians have doubled in the past weeks and months, while the income of citizens remains stagnated.

In several interviews conducted by this newspaper, producers, marketers and consumers expressed dissatisfaction over the spike in the prices of key food products and that it has become highly unbearable, leaving Nigeria’s large population of poor citizens struggling to get food and key ingredients.

PREMIUM TIMES reported how insecurity among other factors have affected important poultry feed formulation ingredients such as maize, soybeans, and groundnut supply in recent months.

Muhammadu Adamu, chairperson of, grain dealers association at Suwarin market in Kiyawa local government area of Jigawa State, said the price of grains compared to that of last year has skyrocketed significantly, but that the prices are now going down following the commencement of the rainy season.

However, he said unlike other markets in the state, Shuwarin market is not much identified with the selling of wheat.

Sule Gomo, chairperson of rice dealers association, in Shuwarin market, attributed the high prices of the grains to high demands due to the increase in population and insecurity in some parts of the country.

“The prices of beans went up because more people went into rice farming,” said an Abak market foodstuff trader in Akwa Ibom state, Samuel Daniel. “Last year January we sold beans between N40-N50 per cup, but we are currently selling it for N150 per cup.”

He explained that the prices of foreign rice went up due to the high cost of logistics involved to smuggle it into Nigeria.

“There are so many Nigerian rice (local rice) in the market and this is what affected the prices of beans, and that people are also complaining that forex exchanges contributed to the hike they’re currently experiencing. The price of a bag of local rice ranges between N15,000 -N25,000 currently, depending on the level of purity of the rice. Stony rice is cheaper. It was sold for N7000 last year,” he said.

The trader lamented that a bag of groundnut in the market is currently as high as N53,000 and that the measurement of groundnut it contains is reduced when compared to the same bag sold for N30,000 last year.

This was majorly caused by the crisis ravaging the Northern parts of the country, Daniel said, and that they’re no longer selling with the hope of making much profit.

“We just don’t want to disappoint our customers,” he added.

At New Benin market in Edo state, Madam RO, a rice retailer said they were selling a “rubber” of rice between N600-N800 last year, but that it is currently being sold for N1,800.

“The price of beans is the worst,” she said, “they used to say that beans are for the poor, but that is not the case now. The price of beans is highly unbearable. People with 6-10 children are bearing the brunt. They can no longer afford even 6 cups of beans anymore, and that will still not satisfy them. How will they survive?”

She explained that they were selling a ‘rubber’ of beans between N400 and N500 before the Covid-19 pandemic, but that it is currently being sold above N1000 per rubber.

In a similar manner, prices of essential vegetables and spices such as Tomatoes, peppers, and onions have also been on a steady rise.

Many Nigerians have been lamenting about the spike in prices of these components being the necessary spices and vegetables required for the preparation of soups and other delicacies.

At Wuse market in Abuja, Baba Gombe, who sells these products confirmed to this newspaper that the prices of these items have gone up substantially.

For Onions, he said a basket is currently being sold for N1,500 per basket, but that he was selling it at N600-N700 about two months ago.

The trader said they usually experience a significant spike in the prices of the product in the rainy season of every year.

Due to the perishable nature of these products, Baba Gombe said he usually runs on huge losses, and that the increase in price has dwindled the purchasing powers of his customers.

”I have lost over N100,000 this past week, because when the tomatoes and peppers are going bad, I do sell them at cheaper prices as “Baje” to food sellers,” he said.

Another trader, Yunusa Mohammed, said the price of plantain is currently N3,000 for a bunch but that it was sold for N2,000 as of last year.

He said in 2020, six fingers of plantain were sold for N500, but four fingers are currently being sold for N500.

”The prices increased this year, plantain is also a seasonal food, it is not the season now so this must have affected the price of the food,”he said.

Razaq Fatai, Policy and Advocacy Manager for ONE Campaign in Africa, said the rise in food prices has decimated consumers’ purchasing power.

“For a country where almost 60% of household income was going to food before the coronavirus pandemic, a continuous increase in food prices poses a significant threat to livelihoods,” he said, continuing that “millions of people would eat less food to cope with the shock or spend less money on non-essential goods and services.”

Fatai said the food inflation is driven by many factors, notably Covid-19 restrictions that disrupted food production systems and resulted in sharp currency depreciation that has increased imported food prices.

He explained that the rising insecurity in the country has displaced several food system actors, particularly producers and traders. Adding that the impact of climate change is negatively impacting farm-level productivity, as the incidence of drought and flood continue to undermine food production efforts.

Jimmy John-Mark, a veterinarian and farmer in Kaduna said the biggest trigger of the increase in the prices of food is insecurity, and that this has stopped farmers from carrying out farming activities and transportation of produce from the farm.

“It has displaced farming communities and has put a strain on national supplies. The second is inflation. Fertilizer prices have gone up dramatically,” he said.

Wilson Erumebor, a senior economist at the Nigerian Economic Summit Group (NESG), said despite the reopening of the land borders in December 2020, Nigerians continue to grapple with a surge in food inflation into the year 2021.

Erumebor stated that the rising food prices could be largely due to the increasing spate of insecurity which has constrained farming activities in the major food-producing regions of the country.

“Other drivers of food inflation include higher food import bill, fuel price hike and the attendant high transport costs across the country, as well as, pandemic-induced breakdown in global food supply chains,” he said.

The economist noted that on the domestic side, a higher fuel price resulted in an increase in transport costs, which has risen significantly with a negative impact on food prices.

He stated that despite the adverse impact of Covid-19 crisis on global supply chains, Nigeria’s food import bill grew by 133 per cent year-on-year in the first quarter (Q1) of 2021, according to NBS.

Erumebor said; “It is no news that the food component accounts for 51 per cent of Nigeria’s consumer price basket. With the prices of all essential food items rising simultaneously year-on-year in May 2021, the purchasing power of Nigerians are expected to reduce drastically as a result.”

“In summary, many Nigerians became poor last year due to inflation-induced shocks. Data from the World Bank’s Nigeria Development Update confirm this assertion,” he added.