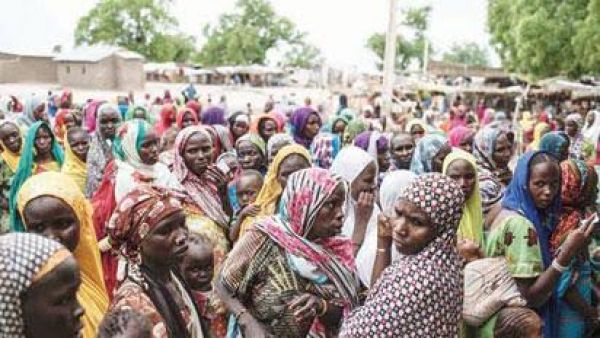 Women in Okpara-Inland in Ethiope East Local Government Area of Delta State on Thursday protested incessant attacks on them and destruction of their farmlands by suspected Fulani herdsmen.

They appealed to Delta State and Federal Governments to come to their rescue.

The women, who embarked on a peaceful protest around the major roads of lsiokolo, headquarters of the local government area grounded commercial activities as they  dropped leaves at the gate of the palace of the traditional ruler of Agbon Kingdom, the President-General’s house and local government secretariat.

The women said: “We have suffered humiliation in the hands of the Fulani herdsmen. They rape and force us to drink herbicides which we use on clearing our farmlands. We have complained several times to our leaders but they are not responding because they might have collected money from the herdsmen.

A victim of the herdsmen’s attack, Roseline Idolor said: “I met the Fulani herdsmen and their cows were destroying my cassava, yams, groundnuts, corn and potatoes on my farm. I pleaded with them not to destroy the crops and they said the land belonged to them because they have paid for it.

The leader of the women, Victoria Eghagha advised that anyone who had collected money from the herdsmen should go and collect his money and retrieve their land from the herdsmen because they don’t want Fulani herdsmen in their community.

When contacted, Ogurime-rime, Ovie of Agbon Kingdom, Ukori I, said the allegation by the protesters that money was collected from the Fulani herdsmen as the exchange of land was not true, pointing out that the kingdom has no personal land that should be given to herdsmen and that the allegations were false.

The monarch, who spoke through Secretary of Agbon Traditional Council, Emmanuel Avworo said: “The Ovie of Agbon is the king of all the sub-clans, towns and villages and these towns are being presided over by the presidents-general or the Okarurho (Eldest man) of each community.

“If they are alleging that lands were given to Fulani herdsmen, then they should take their issues either to the President-General, Okauro or elders from that community and not the palace. In Urhobo, lands are owned by individuals and families and not the kingdom.

“We will ensure that this issue is investigated in collaboration with the security agencies to unravel the root cause of the issues as we want the safety and security of lives in Agbon.”

President-General of Okpara Community, Austin Akatugba said: “This protest embarked on by our mothers is a good one because we have been battling with these herdsmen issues for some time now and we have been handling it systematically.

“We are suffering and smiling over these issues and recently the Fulani herdsmen invaded and destroyed one of our villages and as law-abiding citizens, we reported the matter to the police for investigation. Though the leaders of Okpara were not informed of the protest I am glad that no property was destroyed in the process.”