Nnamdi Kanu narrates how he was abducted, flown to Nigeria by FG’s operatives 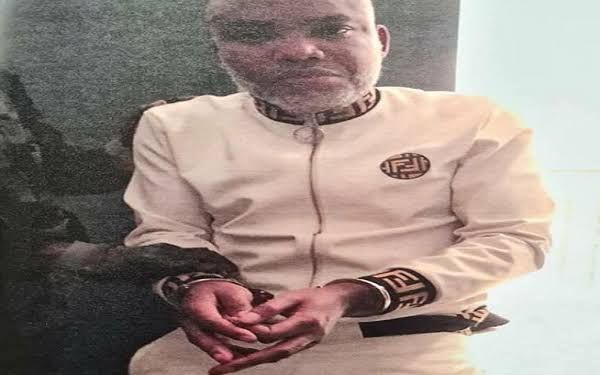 Detained leader of Indigenous People of Biafra (IPOB), Nnamdi Kanu, has revealed how he was blind-folded and flown into the country in a private jet after his abduction in Kenya.

Attorney General of the Federation and Minister of Justice, Abubakar Malami, had said on June 29, the day Kanu was taken to court in Abuja, that he was intercepted outside Nigeria through international collaboration, without revealing where.

Kanu’s brother, Emmanuel Kanu, had, however, alleged that the IPOB leader was “abducted” in Kenyan, detained for days and tortured before being brought back to Nigeria.

The Kenyan government has since denied involvement in Kanu’s arrest and repatriation to Nigeria.

In a statement yesterday, Kanu’s counsel, Aloy Ejimafor, said the IPOB leader, who is currently in the custody of the Department of State Service (DSS), told him he was flown to Abuja in a private jet on Sunday, June 27, 2021 from Jomo Kenyatta International Airport, Nairobi and that he was the lone passenger.

Ejimakor, who visited Kanu at the detention facility on Tuesday, said Kanu told him he was blind-folded and driven to the tarmac very close to the plane without passing through the airport immigration and that the plane departed Nairobi at about 12pm and arrived Abuja in the evening.

Revealing more details on the abduction, Ejimakor said: “Kanu was tortured and subjected to untold inhuman treatment in Kenya. He said his abductors disclosed to him that they abducted him at the behest of Nigerian government.”

On whether Kanu had a hint of why he was abducted, the lawyer said: “The people never said much on that except that they were told he was a Nigerian terrorist linked to the Islamic terrorists in Kenya. But after several days when they discovered his true identity, they tended to treat him less badly.”

Continuing, Ejimakor said no warrant of arrest “was shown to Kanu or even mentioned to him. And for the eight days he was held incommunicado, nothing of presenting him before a court or transferring him to an official detention facility was ever mentioned. He was held in a non-descript private facility and chained to a bare floor.”

He said when he visited the DSS detention facility on Tuesday, “Kanu was interviewed for the first time in my presence by three DSS officers. The interview was revealing as it contained certain new allegations that were never heard of before. But they all relate to his status as the leader of IPOB.”

The lawyer added that despite what Kanu has passed through, he was in high spirits and looked forward to overcoming the extraordinary rendition that brought him to Nigeria.

On how Kanu was arrested in Kenya, the lawyer revealed in a chat with Daily Sun that the IPOB leader told him he was intercepted at the underground car park of Jomo Kenyatan International Airport, Nairobi, where he had gone to pick up a visitor arriving the airport.

“When he raised an alarm and a few people around wanted to intervene, his abductors told them he was a dangerous terrorist tied to Islamic Al-Shabab in Kenya and the Good Samaritans withdrew,” he said.

Meanwhile, Kanu family is blowing hot over the manner their son was arrested by the Nigerian government.

In a statement signed by his younger brother, Kingsley Kanu, and entitled: “A British citizen kidnapped,” the family said there would not be any court proceeding on July 26, until the issue of how the IPOB leader was arrested and brought back to Nigeria was addressed.

“There won’t be court proceedings on July 26, until Nigerian government addresses the issue of extraordinary rendition of Kanu from Kenya to Nigeria.

“Illegality can not give birth to legality. Kanu has now become the victim of one of the gravest crimes in international law.

The family urged the UK government to insist Nigeria should return Kanu to the UK to face extradition.