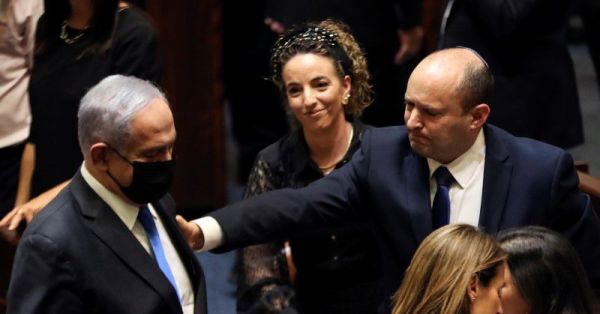 Bennett, representing the Yamina party, leads a coalition alongside the Yesh Atid party’s Yair Lapid. As part of the arrangement, the two men would split the term as prime minister, with Lapid expected to take over in two years, the Jerusalem Post reported.

"Thank you Netanyahu for a long service with many achievements for the State of Israel, for strengthening Israel's diplomatic status and security," Bennett said in Hebrew before the Knesset on Sunday, according to the Post’s Lahav Harkov.

Bennett’s address was regularly interrupted by shouting from Netanyahu’s supporters, while the outgoing prime minister sat silently in the audience.

Netanyahu, of the Likud party, will lead the opposition within the Knesset. He is also dealing with a corruption trial based on allegations of fraud, breach of trust and accepting bribes. He followed Bennett's address with a speech of his own, in which he touted major developments during his administration. While he was in office, the U.S. moved their embassy to Jerusalem, recognizing the city as Israel's capital. Netanyahu also reached peace agreements with several Arab nations.

"We'll be back," Netanyahu predicted.

The change in Israeli leadership does not appear to signal a change in the country’s position on international affairs. Bennett thanked President Biden for his support during Israel's recent clash with Hamas is Gaza, and said his government plans to develop relationships with members of both major American parties.

At the same time, Bennett echoed the outgoing prime minister’s opposition to restoring the international nuclear deal with Iran. He said a return to the deal would be a mistake and that Israel will not let Iran obtain nuclear weapons.

Bennett and Lapid were able to garner enough support to form their government following a deal Lapid made with the Arab party Ra’am, the Post reported.