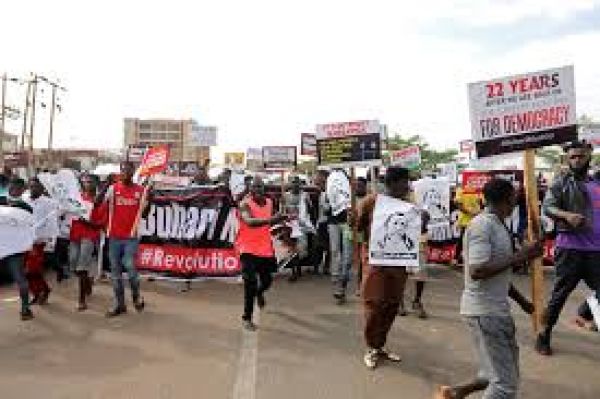 Nigerians, mostly youths, yesterday held peaceful processions and rallies in some states of the federation to mark this year’s Democracy Day.

However, normal activities went on in some states just as residents in other states stayed indoors to commemorate the day. Some leaders across the country also used the occasion to send their goodwill messages to the citizenry.

In Ogun State, some Yoruba nation agitators and youths yesterday joined June 12 protesters in Abeokuta, Ijebu-Ode and other parts of the state.

Our correspondent observed a handful of protesters armed with #BuhariMustGo and #YorubaNation placards on the streets of Abeokuta.

However, major markets and shops were shut as traders and residents stayed back home for the fear of backlash.

A joint security team also embarked on a show of force round the state capital to curtail activities of the protesters.

Major streets were deserted in Osogbo, Osun State capital, yesterday as residents stayed at home for fear of attack by some individuals calling for Nigeria’s break up to pave way for Yoruba nation.

Policemen were seen at strategic locations monitoring the procession to prevent hoodlums from hijacking the rally.

Shops and business centres were shut and major roads that were often very busy were almost empty as only few vehicles were seen on the roads.

After the rally, activists and students converged on an event centre for Democracy Day lecture.

Pioneer President of the Nigeria Labour Congress (NLC), Taiwo Hassan Sunmonu, who was the chairman of the occasion highlighted the sacrifices of late Moshood Kashimawo Abiola and lauded President Muhammadu Buhari for recognising June 12 as Democracy Day.

Niger State government banned procession in the state and called on the people to use the period to reflect on their roles in peace building, due diligence, and good governance for sustainable development and virile economy in the state.

The government in a Democracy Day message by the Secretary to the Government of Niger State (SSG), Ahmed Ibrahim Matane, commended the people for their support for the programmes and policies of the present administration in the state.

According to the SSG, “the decision to ban all forms of processions was as a result of the security situation in the state.

No protests in Benue, Bayelsa

In Benue and Bayelsa states, there were no protests as activities moved on normally.

Our correspondent reports that major towns of the state including Makurdi, Gboko and Otukpo remained calm and devoid of threats.

The government in its message advised the youths in the state to always venture into meaningful activities that will better their tomorrow and foster better society.

Protest in Edo amid tight security

A combined team of security operatives who were more in number than the protesters were at the Museum ground, the take off venue of the protest, to forestall breakdown of law and order.

Agba Jalingo, publisher of Cross River Watch, an online newspaper; the News Editor, Jonathan Ugbal, and another yet-to-be named person were picked up in front of the office of the outfit near the popular Rabana Junction in Calabar.

The state governor, Ben Ayade, had earlier warned that he would not tolerate any form of protest or procession, otherwise such would be met with force.

When journalists called the commissioner of police in the state, Sikiru Kayode Akande, he said he would speak later on the matter.

Former attorney-general and Commissioner for justice in the state who is counsel to the four rights campaigners, Attah Ochinke, said, “I can confirm that the four comrades have been granted bail and released from Puff Adder custody.”

Despite massive police deployment, June 12 protesters in Lagos occupied the Gani Fawehinmi Park at Ojota Lagos amidst tension around the state.

Police took over the venue early in the morning to prevent the protest.

Even at that, the protesters singing and carrying placards with different inscriptions began to gather in number for the protest against bad governance.

Some journalists were also manhandled while the memory card of a photojournalist was seized by the police.

Governor of Oyo State, Seyi Makinde yesterday joined ‘Buhari Must Go’ protest in Ibadan, the Oyo State capital as part of June 12 planned nationwide protest. The protesters had earlier stormed his Bodija residence at a time he was going out but the governor joined them to move round the city.

Makinde who addressed the jubilant youths with megaphone sat down on the roof of his car.

One of the protesters, Tayo Ogunwale, told reporters that Nigerians had never experienced the current situation before now.

Major streets in Akure, the Ondo state capital were yesterday deserted and business activities paralysed as traders and residents stayed indoors for fear of crisis that may arise from the June 12 protest.

Youths in  their numbers moved round the state capital in a peaceful protest.

Some members of the groups had gathered at the Pressure Park located at the Aba Port Harcourt road in the early hours of yesterday to join other youths across the state to decry the high level of insecurity and hardship ravaging the country.

The group was led by the chairman of the Rivers State Civil Society organization, Enefaa Georgewill.

Anti-riot police officers had early in the morning taken over the Pressure Park where the group was to address a rally.

One of the protesters, Johnbull Okoro told our reporter that Nigerians are worried over the heightened insecurity, high inflation rate and general hardship across the country.

He called on the federal government to improve the security situation across the country and reduce high inflation rate which has affected the prices of goods and services.