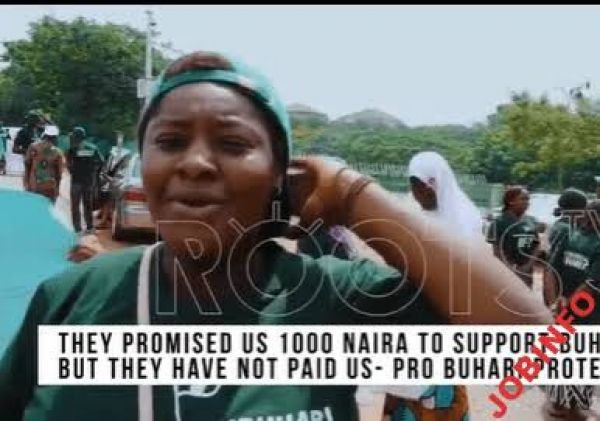 Some persons who held a rally in Abuja to support President Muhammadu Buhari amid the June 12 protests have claimed they were promised monetary compensation.

But some of them have been attacked by both the police and opposing groups, including in Abuja where the pro-Buhari group mobbed a lone protester.

In a video interview with RootsTV Nigeria, two ladies wearing T-shirts with the inscription, “I stand with Buhari, what about you?” said they were offered N1,000 to protest in favour of the president.

But they did not mention anyone who made the purported deal with them.

“One thousand naira brought us here,” one of them said.

The reporter asked them the money was to support who and one replied, “Baba Buhari… I came here for one thousand naira.”

As they smiled to the camera, both ladies said they were yet to receive their money.

The interview was, however, interrupted by a male voice (probably the coordinator of the group) who asked the ladies to stop talking.

“Nobody asked you to grant an interview. Please stand there,” the man said.

Other members of the group were seen chatting in small clusters.